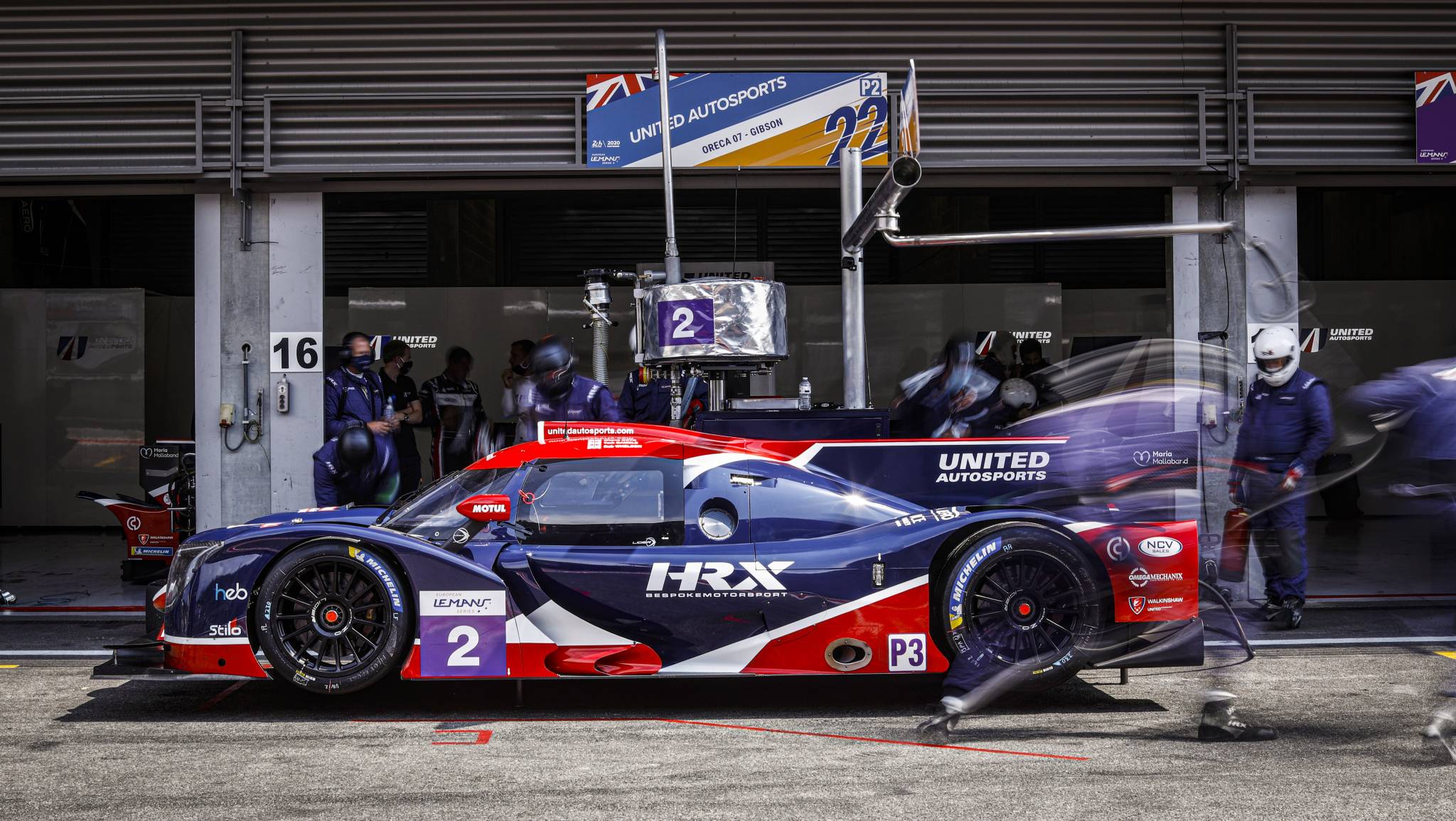 8-9 August 2020. A flawless weekend for the Ligier JS P320 on the daunting seven-kilometre Spa-Francorchamps circuit at round two of the European Le Mans Series and Michelin Le Mans Cup. Best time in the collective tests, free-practice, qualifying and in the race. The pole position and win. All of this in both championships. The Anglo-American United Auosports team and its #2 Ligier JS P320 crushed the competition in ELMS and the #37 Cool Racing Ligier JS P320 took both the pole and win in LMC.

A convincing round two of the European Le Mans Series for the Ligier JS P320 on the Belgian Spa-Francorchamps circuit! The #2 United Autosports Ligier JS P320 takes top honours with best time, pole and the win. A second win in a row for the Anglo-American team. Defending champions, the #11 Eurointernational Ligier JS P320, finishes third.

The Ligier JS P320 was consistently the fastest in the collective tests, free-practice, qualifying and the race.

A collective test session on the Wednesday, August 5th preceded free-practice on Friday. The #2 United Autosports Ligier JS P320 in the hands of Wayne Boyd recorded the best time of 2:12.842s, to lead the #7 Nielsen Racing Duqueine 08 by one second. Wayne Boyd was back on top in free-practice and qualifying with a time of 2:12.634s, at more than a second clear of Laurents Hörr in the #4 DKR Engineering Duqueine 08. The British driver claimed his second pole position.

At 11am on Sunday, 12 LM P3 entries, including eight Ligier JS P320s lined up on the starting grid. Robert Wheldon set off from row one in the #2 United Autosports Ligier JS P320. By his side, François Kirmann in the #4 DKR Engineering Duqueine 08. Four Ligier JS P320s shared row two and three: the #8 Realteam Racing with Esteban Garcia onboard, the #3 United Autosports with Andrew Bentley, the #15 RLR MSport with Malthe Jakobsen and the #11 Eurointernational with Thomas Erdos.

The race turned out to be eventful affair, punctuated by safety car periods, yellow flags, scorching heat and a little rain to boot.

The duel at the sharp end of the order between the #2 United Autosports Ligier JS P320 and the #15 RLR MSport entry was the story for a good portion of the race. From P5 on the gird, Malthe Jakobsen in the #15 pushed hard early on to move up to second place ahead of the #4 Duqueine 08. The first race incident (in the category) came on lap four with the off of the #5 Graff Duqueine 08. At the 16-minute mark of the race the #10 Nielsen Racing Duqueine 08 spun at the Jacky Ickx corner. Martin Hippe in the #13 Inter Europol Competition car couldn't avoid contact and ended up in the tyre barrier. The driver was able to walk away from the accident, but sadly it was the end of the race for the Polish team. At the re-start, 10 minutes later, the #2 lost its advantage as the #15 began to close in. But despite the pressure, Robert Wheldon didn't flinch and held onto a one-second lead.

Contact between a GT and an LM P2 car brought the safety car out again. The battle between the two leading cars resumed 11 minutes later. During the first pits stops the #2 United Autosports didn't make a driver change and retained the lead. On the other hand, James Dayson took over in the #15 RLR MSport but he accidently made contact with the #8 Realteam Racing and Esteban Garcia in the braking zone at La Source. Both cars spun, but both re-joined the action.

After the second round of stops, the battle between the #2 with Tom Gamble at the controls and the #15 resumed. The duel between the two leading cars came to an end when the #15 received a drive-through penalty for its collision with the #8. This worked to the advantage of Colin Noble in the Nielsen Racing #7 Duqueine 08, who inherited second place, but at more than a minute a drift to the leader. A gap that he would not make up.

While the positions of the two leading cars were now set, the battles continued among the Ligier JS P320s for the lower places, in particular for the #9 Graff, the #11 Eurointernational and the #3 United Autosports entry, due to the neutralizations that arbitrarily penalised certain cars. The rain also added some excitement to a race that had already its fair share. In the waning minutes the #8 Realteam Racing Ligier JS P320 with David Droux behind the wheel, which was in the third place at the time stopped at the entry to the pits. It would not be classified.

The #2 of the Anglo-American United Autosports team scored a resounding victory, its second of the season, with a comfortable 55+ second margin of victory over the #7 Nielsen Racing Duqueine 08 and the fastest lap in the race. Thomas Erdos, Niko Kari and Andreas Laskaratos in the defending champion #11 Eurointernational Italian team completed the podium. Vincent Capillaire and brothers Maxime and Arnold Robin in the #9 Graff finished just off the podium. James McGuire, Duncan Tappy and Andrew Bentley in the # 3 United Autosports rounded out the top 5. The #15 RLR MSport Ligier JS P320 finished seventh and the #16 BHK Motorsport was nineth.

Inter Europol Competition also raced in LM P2, with Kuba Smiechowski, Rene Binder and Matevos Isaakyan in the #34 Ligier JS P217. Starting 16th, they showed good pace, but problems during a pit stop and contact with another car, followed by repairs and a penalty, kept them out of the top ten. They finished 11th.

The Ligier JS P320 runs the table in round two of the Michelin Le Mans Cup at Spa-Francorchamps, with best time in the collective tests, free-practice as well as pole position, the win and the fastest lap in the race. And it was the #37 Cool Racing Ligier JS P320 that dominated the weekend. The line-up of Cauhaupé and Maulini claimed the pole and won going away with a 24-second margin of victory to the DKR Engineering Duqueine 08. The #23 United Autosports Ligier JS P320 with Wayne Boyd behind the wheel posted the best time in the race. The Ligier JS P320s were back on form after misfortune at the opening round of the season at Circuit Paul Ricard before settling for second and third place.

During the two collective tests run on Wednesday, August 5th, the #98 Motorsport98 Ligier JS P320 led the way with a time of 2:13.977s. The Ligier JS P320 was back at it on Friday, August 7th during the two-official free-practice sessions. This time it was the #23 and #24 United Autosports entries on top of the time sheets. The performance of the Ligier JS P320 was also on demonstration in qualifying. The #37 Cool Racing Ligier JS P320 claimed its first pole position of the season with a best lap of 2:15.410s with Nicolas Maulini at the controls, 0.525s ahead of the Mühlner Motorsport Duqueine 08.

The start of the race at 3:55 pm on Saturday was disrupted by an accident on the Kemmel Straight. Once the track was cleaned, the race was able to begin in earnest.

The #37 Cool Racing Ligier JS P320 with drivers Nicolas Maulini and Edouard Cauhaupe ran error free. They continued to build a lead throughout the race. Before the opening round of pits stops, they had a more than 27-second cushion. Following a delay during its stop, it lost a large portion of its lead and returned to the track with just a 7.5 second advantage. But once up to speed, the #37 continued to push and extended its lead. They crossed the finish line with a 27-second gap over the DKR Engineering Duqueine 08. A message-sending triumph is reward for all the work put in by the team and makes up for the hard luck suffered in the opening round at Castellet. After missing out on the pole for just 0.043s, the #37 was obliged to start the race from the pitlane and down one lap following an engine mapping problem before being centre-punched by another competitor and forced to retire.

The #23 United Autosports Ligier JS P320 with John Schauerman and Wayne Boyd finished just off the podium after a strong comeback drive by Boyd in the final hour. He posted the fastest lap of the race in 2:14.949s.

The #26 Graff Ligier JS P320 finished fifth with Matthias Kaiser and Rory Penttinen on board after having battled in the top 3 for most of the race. The #98 Motorsport98 Ligier JS P320 with Eric De Doncker and Dino Lunardi, which set the best time in LM P3 this weekend at Spa-Francorchamps during the collective tests came home in sixth place, ahead of the #69 Cool Racing Ligier JS P320 driven by Maurice Smith and Matt Bell. The#27 MV2S Racing Ligier JS P320 with the duo of Christophe Cresp and Fabien Lavergne completed the top 10.

The #34 United Autosports Ligier JS P320 with the tandem of Daniel Schneider and Andrew Meyrick did not finish the race due to heavy damage following a collision with a Ferrari.

Due to health concerns, rounds three of the 2020 European Le Mans Series and Michelin Le Mans Cup will take place on Saturday August 29, 2020 at Circuit Paul Ricard in France in place of Barcelona.

For more information on the Ligier JS P320 : https://ligierautomotive.com/en/vehicles/sports-prototypes/ligier-js-p320/