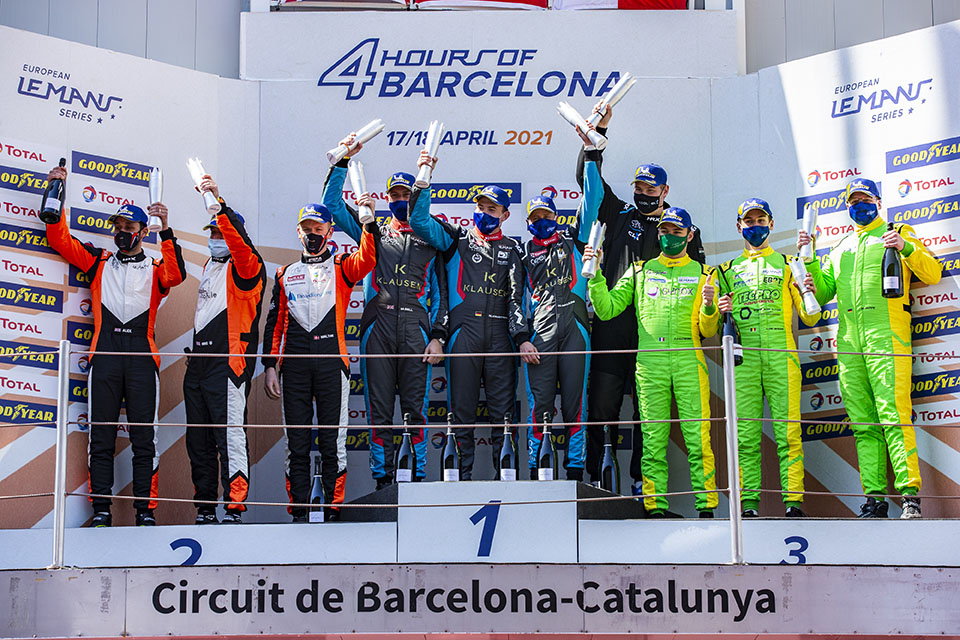 16 - 18 April 2021 - The first endurance race of the season in Europe took place this weekend at the Barcelona circuit in Spain, during the European Le Mans Series. Fourteen Ligier JS P320s were entered in the LMP3 category. After dominating the free practice sessions and qualifying, the sport-prototype took the category win with an impressive top-four finish led by the #19 of Cool Racing car, followed by the #15 RLR Msport, #13 Inter Europol Competition and the #18 1 AIM Villorba Corse. A successful weekend for the French constructor's Ligier JS P320 that the day before swept the top 5 in the opening round of the Michelin Le Mans Cup on this same circuit.

The 2021 European Le Mans Series season kicked off on April 16th with the opening free practice session. Ligier dominated the session with the top four positions with the #8 Graff JS P320 driven by Eric Trouillet, Sébastien Page and David Droux, clocking the fastest lap in LMP3 with a time of 1:39.763s.

It was a repeat performance the following day with two best times set by the Ligier JS P320. The #3 United Autosports car topped the timesheets with James McGuire, Duncan Tappy and Andrew Bentley in 1:39.772s, followed by the #20 Team Virage car driven by Rob Hodes, Garett Grist and Charles Crews with the second-fastest time of 1:40.909s.

More success came later in the day in qualifying, with the Ligier JS P320 locking up the top three places on the grid with the #3 United Autosports car (1:39.162s) on pole, followed closely by the #15 RLR MSport car driven by Mikael Benham, Alex Kapadia and Malthe Jakobsen (1:39.183s) and the #2 United Autosports (1:39.224s) with Wayne Boyd, Robert Wheldon and Edouard Cauhaupe at the controls.

On Sunday started the first four-hour race of the season. The #19 Cool Racing Ligier JS P320 of drivers Nicolas Maulini, Matt Bell and Niklas Kruëtten put in an excellent race. Starting ninth on the grid, it moved up to fourth place in the opening hour. At the end of hour two, it was up to second place. It dangerously followed the race leader in the final hour before taking the lead 23-minutes from the chequered flag and go one for the win in this first round of the ELMS.

The #15 RLR MSport Ligier JS P320 also had a strong race. Starting second on the grid, it was in fifth place at the end of hour one after receiving a penalty for speeding in the pit lane. It was running in eighth place at the mid-way point of the race. But the team didn't quit, and thanks to an excellent stint by silver driver Alex Kapadia, it was up to third place heading into the final hour before taking the fight to the second-place car. It went on to finish on the second step of the podium.

Starting from fifth place on the grid, the #13 Inter Europol Competition Ligier JS P320 with Martin Hippe, Ugo de Wilde, and Julien Falchero behind the wheel ran in the top five before snatching third place with 15 minutes remaining in the race.

The #18 AIM Villorba Corse Ligier JS P320 driven by Alessandro Bressan, Andreas Laskaratos and Damiano Fioravanti also put in a standout performance. Eighth in qualifying, it moved up the order in hour one. Following some terrific battles, it crossed the line in fourth place in the LMP3 category.

Special mention goes to the #6 Nielsen Racing Ligier JS P320, driven by Nick Adcock, Austin McCusker and Max Koebolt. The car started 15th but was forced off the track in hour two following contact with an LMP2 car. But this was not enough to discourage the team, which gradually climbed up the order to finish a very promising sixth place.

Nicolas Maulini, #19 Cool Racing Ligier JS P320, Winner LMP3 category: "At the start, I moved to the right side of the track, and after turn one, I think I gained four places. So, it was far from being a bad start. The most important thing was not to damage the tyres. We did pretty well, and in the end, the result was there. "

Niklas Krüetten, #19 Cool Racing Ligier JS P320, Winner LMP3 category: "I tried to maintain the pace. I made two pretty big passes on competitors, and then I aimed to preserve the tyres while closing the gap. Racing in endurance is very different from what I have done before in single-seaters. The most important thing on the track is not to be the fastest but to make the fewest mistakes. Today the team and the drivers made very few mistakes if any at all.

Matt Bell, #19 Cool Racing Ligier JS P320, Winner LMP3 category: "We had some trouble with our tyres before this weekend. From the start, it was a matter of looking after them properly, because we had the opposite strategy to our competitors, who started the race with their silver driver and finished with their bronze driver. We tried to maintain the pace to preserve the tyres while reducing the gap. It wasn't easy with the traffic, but we didn't make any mistakes, and we took the win!”

Round two of the ELMS will take place on 15 and 16 May at the Red Bull Ring in Spielberg, Austria.