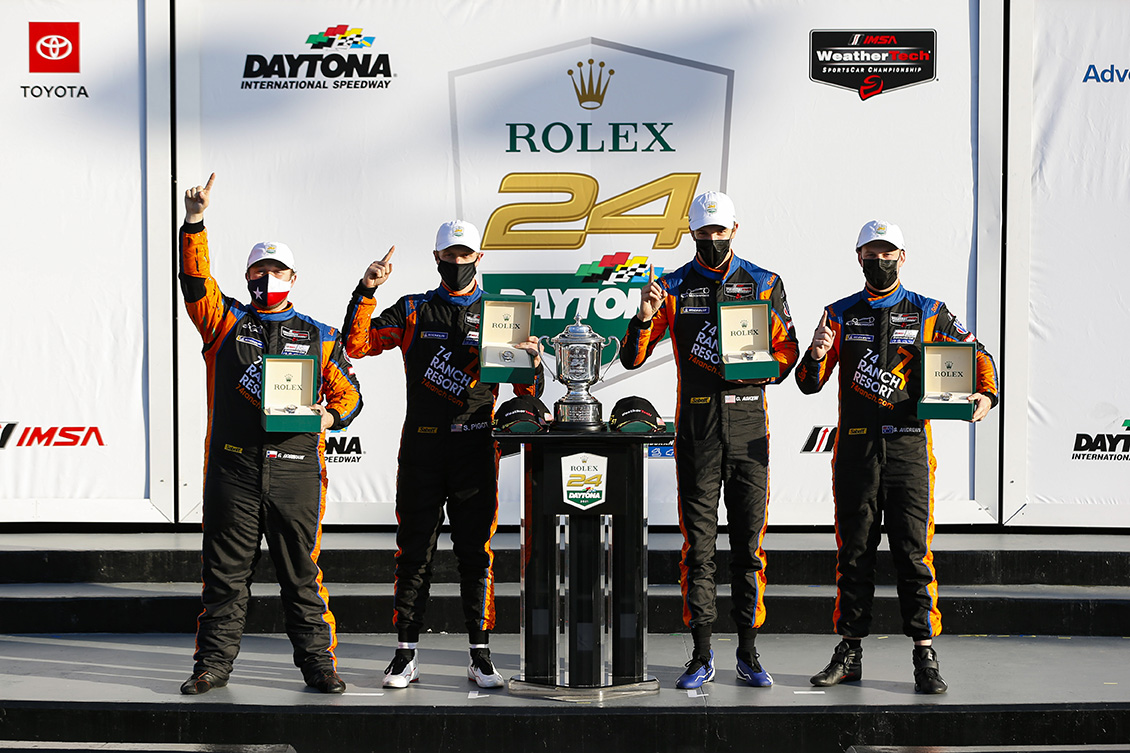 French constructor Ligier Automotive scores its second victory and a double in the 24 Hours of Daytona!

30-31 January 2021 – A red-letter weekend for the French constructor!  It's the second time that Ligier Automotive has won the 24 Hours of Daytona.  The first was in 2016 with the Ligier JS P2 entered by Tequila Patron ESM, which was also the first, and so far, only, victory by a French constructor in this iconic event.  The second came this weekend in the LMP3 category with its latest sports prototype, the Ligier JS P320.  It was the LMP3 category's debut in the American Classic and also in the IMSA WeatherTech SportsCar Championship.  The #74 Ligier JS P320 run by American team Riley Motorsports and driven by Gar Robinson, Spencer Pigot, Scott Andrews and Oliver Askew scored a crushing victory with three laps in hand after leading the category for 17 hours.  The #33 Ligier JS P320 of Americans Sean Creech Motorsport with Lance Willsey, Joao Barbosa, Wayne Boyd and Yann Clairay in the driving seat offered Ligier a great double by finishing on the second step of the podium with four laps in hand over the #06 rival car.  In LMP2, the #51 Ligier JS P217 entered by the team from the Philippines, Eurasia Motorsport and American outfit Rick Ware Racing, finished just shy of the podium with fourth place in the category and 10th overall driven by Cody Ware, Salih Yoluc, Austin Dillon and  Sven Müller after a remarkable race.  Overall, a great reward that confirms the knowhow in endurance of the constructor Ligier Automotive implanted in France and in Charlotte in North Carolina with its subsidiary, Ligier Automotive North America since 2016.

A historic double in the LMP3 category

Four American teams put their trust in the French constructor by entering five Ligier JS P320s.  After getting to grips with their new cars during the official practice sessions at the ROAR on 21-24 January, the Ligier teams shone in free practice for the 24 Hours of Daytona on Friday 28th January:  in particular the #91 Ligier JS P320 run by Riley Motorsports, which set the fastest time of the LMP3s in each of the four sessions.

On Saturday 30th January at 15:40 ET, the tension was palpable on the starting grid.  The stakes were high as it was the first year that the LMP3s raced in the iconic 24 Hours of Daytona and in the American IMSA WeatherTech Championship up till then reserved for the DPis, LMP2s, GTDs and GTLMs.  And it was also the first time that the new-generation LMP3, the Ligier JS P320, presented at the 2019 24 Hours of Le Mans that replaced the Ligier JS P3s in the ACO and IMSA championships raced in an endurance event lasting 24 hours.

And what a success this premier was!  The Ligier teams led the race for more than 20 hours and crossed the finishing line in first and second positions.  All five Ligiers entered saw the chequered flag.  They all proved that they will be redoubtable competitors for the rest of the season.

The #74 Riley Motorsports Ligier JS P320 driven by Gar Robinson, Spencer Pigot, Scott Andrews and Oliver Askew brought home the victory to the constructor.  Yet it started last of the LMP3s as the team had preferred not to take part in the qualifying race on Sunday 24th January in order to fine-tune its preparation for the main event.  After just over three hours racing and a marvellous first stint by Gar Robinson, #74 had overtaken all its rivals.  It installed itself in first place running the show for almost three hours before losing a lap after coming in for its obligatory 8-minute stop minimum to change the brake pads and discs.  When its rivals stopped for the same reason, #74 snatched back the lead.  There were still 13 hours racing to go.  #74 never relinquished first place.  The car crossed the finishing line with three laps in hand over the #33 Ligier JS P320 and seven over its rival competitor, car #6.

The #33 Ligier JS P320 run by Sean Creech Motorsport and driven by Lance Willsey, Joao Barbosa, Wayne Boyd and Yann Clairay started the race in fourth place and went into the lead in the third hour.  It was rear-ended by another car and spun.  This incident cost it first place then and perhaps even victory.  #33 then hung on to second.  While it managed to reduce the gap to the leader it wasn't enough and the team took the chequered flag in second spot.

The second Ligier entered by Riley Motorsports, #91 for Jim Cox, Dylan Murry, Austin McCusker and Jeroen Bleekemolen, the quickest of the LMP3s in free practice was unable to concretize its performance due to an electrical problem right at the start of the race.  It was immobilized at its pit and lost 13 laps.  But the team never gave up and made a stunning comeback finishing just outside the top 3 in fourth position.

The #54 Ligier JS P320 entered by CORE Autosport for Jon Bennett, George Kurtz, Colin Braun and Matt McMurry crossed the finishing line in fifth place.  It was a disappointing result for the team that started in third place but which was hit by bad luck.  After six hours racing it stopped at its pit on several occasions with brake problems.  At half distance it pitted again to have debris removed from a crashed car that had lodged in the Ligier's nose.  With two hours to go to the finish it suffered a puncture that slowed it even further.

The #38 Ligier JS P320 operated by Performance Tech Motorsports with Rasmus Lindh, Cameron Cassels, Mateo LLarena and Ayrton Ori at the wheel also suffered a body blow.  It started fifth of the LMP3s and took the lead after only 20 minutes racing.  A few minutes after its first driver change during the second hour while still in the lead it was hit by a GTLM.  This incident resulted in a series of mechanical problems.  Its first pit stop was to change the front bonnet. It rejoined in the lead, but had to come in again to have its rear lights fixed and fell back.  There was nothing the drivers could do. Despite a good comeback they finished sixth in the category.

After a first season in Europe crowned with success (two titles in LMP3, 15 pole positions, 12 victories, and 14 fastest laps in the 16 races it contested in the three European Championships), the Ligier JS P320's American season in the IMSA WeatherTech Championship has got off to a stunning start!

One Ligier JS P217, #51 was entered by the Pilipino team Eurasia Motorsport and American outfit Rick Ware Racing in the LMP2 category.  This collaboration resulted in a sparkling race.  The driver lineup of Cody Ware, Sahil Yoluc, Austin Dillon and Sven Müller finished fourth in the category and tenth overall.  #51 started the race in 8th place and made a great getaway pulling back three places on the first lap! But a spin then relegated it to the back of the LMP2 pack.  After two hours racing it was back up into seventh place in the category and battled into the top 5.  During the night it had to stop to have the rear bonnet changed.  With nine hours remaining it fought its way back up to fourth where it stayed until the end of the race.

“Winning in two categories in the 24 Hours of Daytona, first of all in LMP2 with outright victory with the Ligier JS P2 in 2016, and now in LMP3 with the Ligier JS P320, there's nothing greater for a constructor!” exclaimed Jacques Nicolet, President of Ligier Automotive.  “I'm very proud of all our teams in France and at Ligier Automotive North America.  They have designed a super car and have worked very hard to deliver it to all our teams within the deadlines despite the current situation.  Thank you to all the race teams who have renewed their trust in us or who have chosen us for this new adventure in the United States.  They gave nothing away and they all crossed the finishing line.  The result is the outcome of really great team work in every sense of the word.”