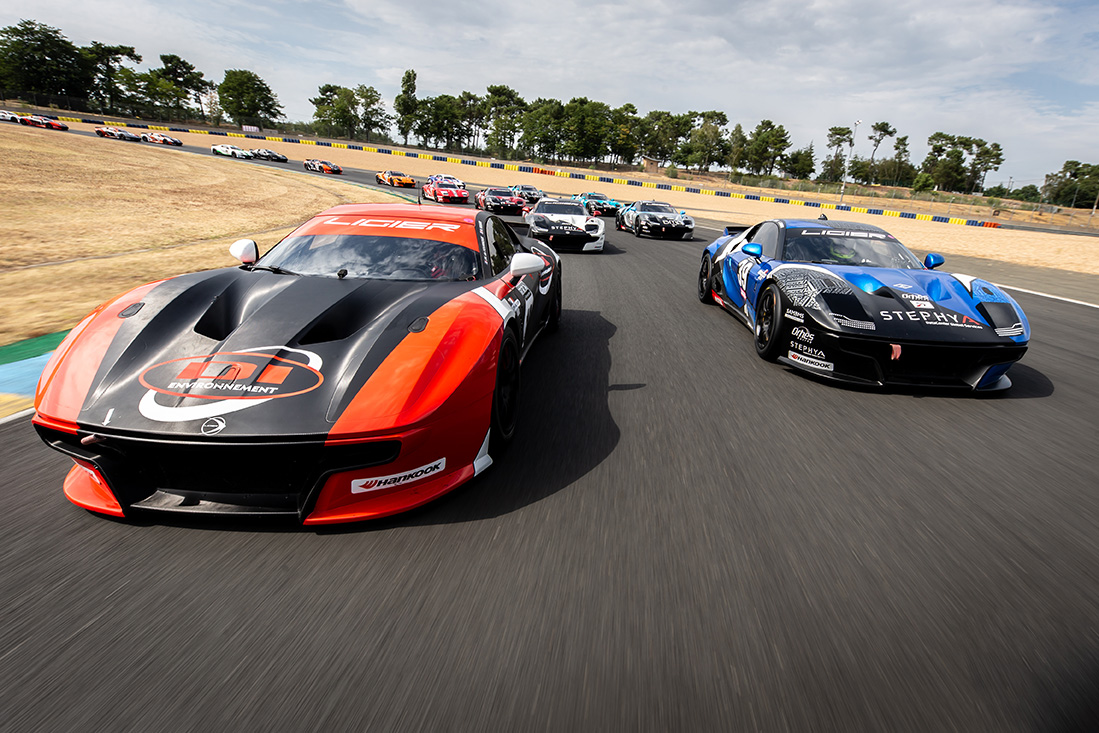 The Ligier JS Cup France’s second season gets off to a flying start!

4th August 2020 – The first round of the Ligier JS Cup France 2020, the single-make formula dedicated to the Ligier JS2 R, took place on 31st July - 1st August on the Le Mans Bugatti circuit in France. 27 Ligier JS2 Rs including new faces and new teams turned up for the eagerly-awaited launch of the second season. The overall level was very high and the race was filled with ding-dong battles out on the track. And newcomer, Mathias Beche Performance, opened the scoring with pole position and the first victory! Filling second and third places on the podium were the #92 Orhès Racing and #28 FIT ITBC Defi Performance teams.

A full top-class field for the second season

The Ligier JS Cup France organised by Benoît Abdelatif and Max Mamers Management teams and launched in 2019 kicked off the 2020 season last weekend. As was the case in the first year the Ligier JS Cup France is a big success attracting 27 Ligier JS2 Rs for the first round on the Le Mans Bugatti circuit. The 2019 season had begun in March just a few months after the official launch of the car in October 2018 on the same Le Mans circuit with 25 Ligier JS2 Rs.

“After all these months of doubt, uncertainty and tension it's a huge relief for everybody to be back together again,” said Benoît Abdelatif. “We're savouring each moment to the full and to see the joy on the faces of all the drivers makes us very happy. We're really delighted as restarting the races on the iconic Le Mans circuit is a great honour, and with 27 cars at the start we couldn't have dreamt of a better kick-off to the season.”

New teams and new drivers joined the field for the first round. Among the newcomers was the Mathias Beche Performance squad created by Mathias Beche, a regular runner in the LMP1 and LMP2 categories. “I was immediately attracted by the format of the races of the Ligier JS Cup France, the track time, the pleasure of driving the Ligier JS2 R, and the price,” explained Beche. Joining him at the wheel of the #15 Ligier JS2 R for the first race was young 23-year-old Romain Carton.

Another team making its debut was the 100% Italian outfit, Subszero Performance Driving Academy, and its #32 Ligier JS2 R for Domenico Schiattarella, Andreas Ritzi and Riccardo di Persia. Other first-timers were the Miloe team, which entered the #33 Ligier JS2 R for Jérôme and Jean-Louis Miloe and Gilles Boyer, the Evolution Racing outfit with #64 driven by Eric Debard, Edouard Cauhaupe and Laurent Cazenave, and the SPI squad comprising the very experienced Alain Ferté, Philippe Illiano and Ander Vilarino.

Also on the grid for the first round were the Ligier JS2 Rs run by French team MV2S Racing entered for the Ligier European Series, the new pan-European single-make, but not single-model, championship for Ligier JS2 Rs and Ligier JS P4s. Their cars were in the hands of Russian drivers Victor Shaytar and Mikhail Makarovskii in #45 and trio Christophe Cresp, Thomas Humeau and Fabien Lavergne in #146.

There were also new faces among the drivers with professionals, circuit regulars and gentlemen drivers. A diverse field with top-class competition for this second season.

The programme of the first round consisted of 1h30 official free practice, with 3-hour track time in option, 30-minute qualifying and the six-hour race! It was a real thrill for the drivers and teams deprived of racing over the past few months.

Free practice took place on Friday in scorching heat with the outside temperature hitting 39 degrees! On Saturday morning the #15 Mathias Beche Performance Ligier JS2 R with Mathias at the wheel clinched pole position in 1m 42.235s just pipping Steven Palette in #48 run by MT Racing who lapped in 1m 42.468s. “This pole is the whole team's first reward and it's validated all the work they've done,” smiled Mathias.

Thirty minutes after qualifying the race got under way. All 27 Ligier JS2 Rs got round the Dunlop chicane without incident. After 30 minutes the safety car was deployed for the first time after an off. Several teams took advantage of this to refuel and carry out their first obligatory 5-minute stop and adapt their race strategy accordingly.

Leading the dance for a good part of the race was the #48 MT Racing Ligier JS2 R in the hands of Steven Palette and Yves Bandi. The #48 set the fastest race time in 1:43.040s. The on-track upsets never let up with several safety car appearances and the classification evolved as refueling stops and driver changes intervened.

#15 run by Mathias Beche Performance got back in front thanks to an off-kilter strategy and final driver change 40 minutes from the end. It took the chequered flag in first place. “We chose the right strategy and that combined with our speed on the track meant that we finished comfortably ahead of our rivals,” explained Mathias. Romain Carton's first weekend was a big success: “I like the car very much. It really highlights everyone's driving skills. The race format is very interesting as it gives you a lot of running time. I'm very motivated to chalk up more victories!”

Ronald Basso, Olivier Pernaut and Nicolas Prost in #92 entered by Orhès Racing put on a mind-blowing final stint and fought their way up from sixth to second place at the finish. “We didn't have much luck with the safety cars ,” explained Nicolas. “And the Ligier JS2 R run by Mathias Beche Performance was very quick. But we made a great comeback in the last stint. The car's really very engaging and fun to drive”. “It was a super experience at the wheel of the Ligier JS2 R, which I really got to grips with this weekend,” added Ronald. “The Orhès technical team did a marvellous job to help us improve on the track with, in particular, a lot of work on the data with the engineer. It was a real pleasure to be back on the circuit in these conditions”. “Our second place shows that we've got what it takes to win, and we're going to do our utmost to achieve this,'” summed up Pernaut.

#28 run by FIT ITBC Defi Performance for Vincent Capillaire and Emmanuel Orgeval, who were among the front-runners throughout the race, grabbed third place at the last moment following a problem on #93 run by No Limit Racing. “I was originally supposed to drive with Franck Dezoteux,” said Vincent. “But finally, he wasn't able to take part in the race. But he'll be back soon! Emmanuel replaced him. It was a race full of twists with several safety cars which opened up a whole range of possibilities. Thanks to a good pace in the race and a good strategy we were able to finish on the podium.”

The #25 SPI Ligier JS2 R of Alain Ferté, Philippe Illiano, and Ander Vilarino finished just shy of the podium in front of #48 run by MT Racing and #93 entered by No Limit Racing for Raphaël Descamps and Nicolas Ciamin.

The second round of the season will take place on the Magny-Cours circuit on 21-23 August.