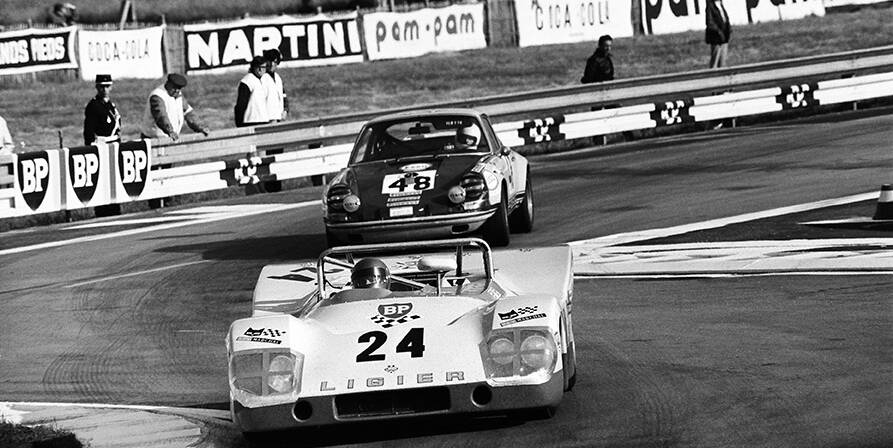 The Ligier JS3, a unique car in more ways than one!

In the history of the “Bleus” brand the JS3 is the only car designed and built for one race, the 24 Hours of Le Mans. Just one was constructed and it had a short life.

While the world of endurance was expecting the JS2, which was supposed to follow in the JS1's footsteps, it saw instead an ambitious 2-seater open sports car unveiled in the Ligier workshops in Vichy on 15th March 1971. It was certainly a strategic choice, but also one subject to another unavoidable necessity as the JS2 was not yet ready to race. Cosworth had been late in delivering the engine originally selected and a V6 Maserati would now power the new GT. But at Ligier as history would prove on several occasions the company knew how to bounce back.

Engineer Michel Têtu had developed in parallel a car of a radically different nature, an open prototype designed for racing only and a chassis that stood out because of its clean-cut lines emphasized by the yellow and green livery of its main sponsor, BP.

This JS3 was powered by a 2993 cc V8 Ford Cosworth DFV, an engine much more accustomed to F1 cars, which was making its debut in endurance.

The stated aim was the 24 Hours of Le Mans and in preliminary practice on 17 - 18 April the JS3 confronted its redoubtable rivals Porsche, Ferrari, Alfa Romeo and Matra for the first time. And it didn't disappoint setting the 12th best time on Saturday and the sixth-quickest on Sunday as well as the fastest time in its 3-litre category. This performance was amply sufficient to qualify the Ligier for the race in the Sarthe. The weekend finished on a high note as the no. 32 JS3 driven by the boss himself crossed the finishing line in second place in the 3-hour race of this practice session. Behind a Porsche 908 what's more!

The team's optimism was given a further boost the following weekend when Guy Ligier emerged victorious in the Coupe de Printemps on the Montlhéry circuit. But on its second outing in the 24 Hours of Le Mans Ligier was not destined to finish the race. Despite finding themselves in a superb fifth place in the 18th hour Patrick Depailler and Guy Ligier were stopped in their élan by a gearbox problem. After a pit stop lasting almost four hours they rejoined and even though they crossed the finishing line they were not classified. With just 270 laps covered the JS3 failed to reach the minimum number required to be classified. However, it was the only car in its category - and the only French one - to take the chequered flag. Under the ovations of the public the JS3 received no reward for its great performance in these 24 Hours, its last race. The following year it was abandoned in favour of the JS2 destined for both racing and the road.

The JS3's next appearance at the circuits had to wait for the organisation of competitions for historic racing cars. And it was quite naturally during the 2004 Le Mans Classic, the race for which it had been originally designed. In 2010, Jacques Nicolet and the-then owner of the green and yellow open sports car, Jean-Marc Luco, won the first heat of their grid.

It's a great memory for Jacques Nicolet and a moving one too:

“This open racer is a real no frills car: no power steering, no ABS, no traction control, no driver aids. Extremer sensations but good road holding, and you don't suddenly lose control without warning. It's very light so it's very quick! It's got nothing to envy modern cars. I lapped in 4m 04s at Le Mans Classic while our Ligier JS P2 got round in 3m 56s in 2014! In 2010, that led to a phone call from Guy. He was delighted and he wanted us to build racing cars together!”

That came about in 2014 when Ligier handed over the reins of the motor racing brand to Jacques Nicolet and the Ligier JS P2 first saw the light of day!