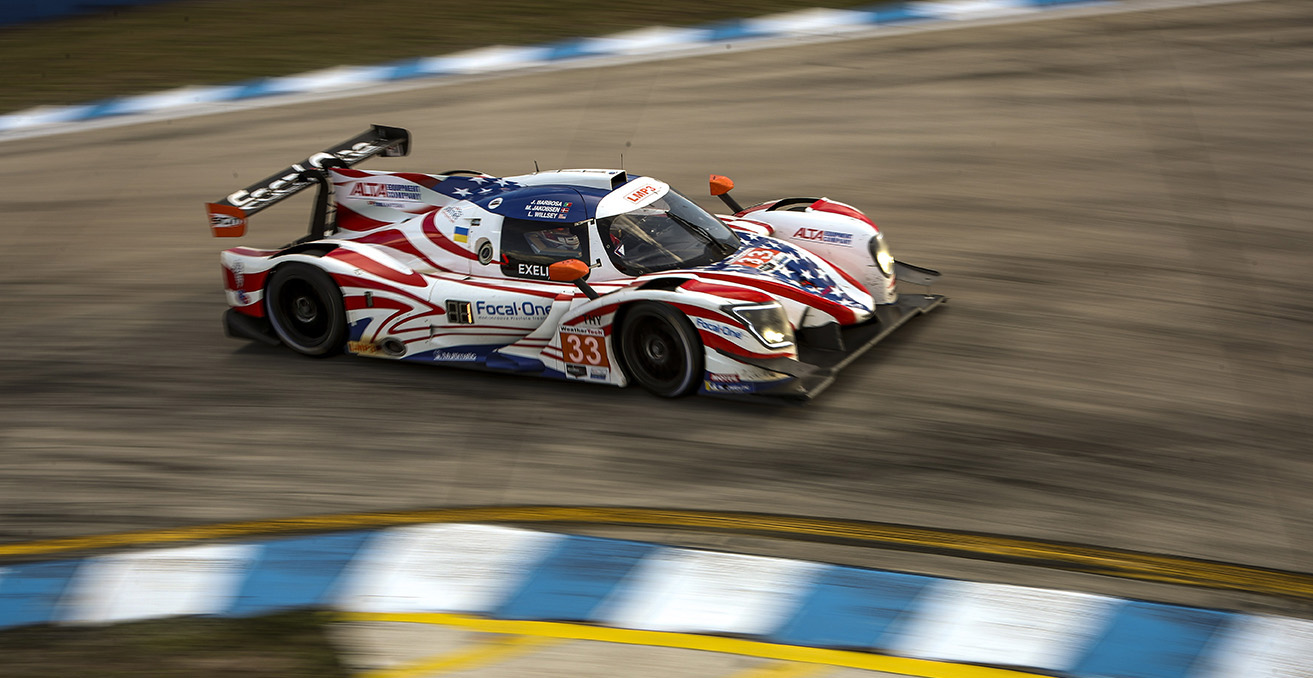 12 Hours of Sebring: The Ligier JS P320s score a dominant win for the second year running!

19th March 2022 – In the 12 Hours of Sebring, the second round of the IMSA WeatherTech SportsCar Championship, the French constructor saw double! Second 100% Ligier JS P320 podium of the year after the 24 Hours of Daytona and second victory and top 3 after the 2021 12 Hours of Sebring. The Ligier teams gave their rivals no quarter: fastest times in all four free practice sessions by four different teams, pole position, victory, top 3 and fastest lap in the race. Out of the six Ligier JS P320s entered five occupied the lead in the category during the 12 Hours, a total of 313 out of the 331 laps covered by the overall winner. Victory went to the #33 Ligier JS P320 run by Sean Creech Motorsport which, in addition, scored its maiden win in LMP3 followed in second place by #30 entered by Jr III Racing and Performance Tech Motorsports' #38 in third.

The start of the 12 Hours of Sebring was given at 10:10 am on Saturday 19th March and right from the get-go the #74 Riley Motorsports Ligier JS P320 held on to the lead. Fifteen minutes later it spun without hitting anything but fell back to fourth. It quickly recovered the ground lost and was soon back scrapping for the lead. At half-distance it was comfortably installed in first place in the LMP3 category in front of three other JS P320s. But then it was involved in another incident. Three hours before the end of the race the #74 was victim of a contact that damaged its radiator and the team was forced to retire for the first time since its debut with the Ligier JS P320 in IMSA in January 2021.

The #33 Sean Creech Motorsport Ligier JS P320 put on a dazzling performance. After making a quiet start to the race #33 took advantage of a yellow flag to move up among the front-runners in the fourth hour. It stayed in the top three in its category and took the lead eight hours after the start triggering a long no-holds-barred battle with the #30 Jr III Racing Ligier JS P320. The two rivals swapped the lead until #33 got the upper hand. Young 18-year-old Malthe Jakobsen who was at the wheel at the time opened up a gap and crossed the finishing line in first place with almost 50 seconds in hand over #30. After its second place at Daytona the #33 Ligier JS P320 run by Sean Creech Motorsport scored its first victory since its debut in the championship in 2021 as well as setting the fastest lap in the race in a time of 1:57.347s with six laps to go to the chequered flag!

“It's great,” said Barbosa, “We were very close at Daytona last year and this year, and we needed a big win. The guys have been working really hard (…) Everything went our way,” he said. “We were able to get the lap back, we got the yellows at the right time and it seems like everything was going our way. Sometimes, Sebring picks the winner and it seems like it was our turn to win this race.”

“I got the fuel light after I crossed the finish line (for the checkered flag),” added Jakobsen. “It's my first win in sports cars. I only won in single-seaters before, so it's a massive race to win. First time at Sebring and to win it, that's not bad.”

The #30 Ligier JS P320 entered by Jr III Racing made a big impression in its first race of the season in IMSA. The team became a serious victory contender from the fourth hour onwards when it moved up into the top three and even took the lead. Garett Grist and Dakota Dickerson's sheer speed combined with Ari Balogh's consistency helped #30 to finish on the second step of the podium after 12-hours racing. Jr III Racing spent the least time in the pits of the front-runners in LMP3 warning its rivals that it will be a serious contender for the rest of the season.

The #38 Performance Tech Motorsports Ligier JS P320 qualified in fifth place and snatched the lead in the category an hour after the start thanks to a Dan Goldburg at the top of his game. The team stayed in the top three until the fifth hour of the race before falling back down the time sheets. But with three hours to go #38 had fought its way back up to third where it stayed till the chequered flag. A result that bodes well for the next round.

After holding third place on several occasions the #54 CORE Autosport Ligier JS P320 came home fifth. The #36 Ligier JS P320 entered by Andretti Autosport suffered an overheated engine during the grid lineup and was unable to take part in the race.

In the meantime, the Ligier JS P320s will be back on European circuits on 16 - 17 April with the launch of the Michelin Le Mans Cup and the European Le Mans Series.