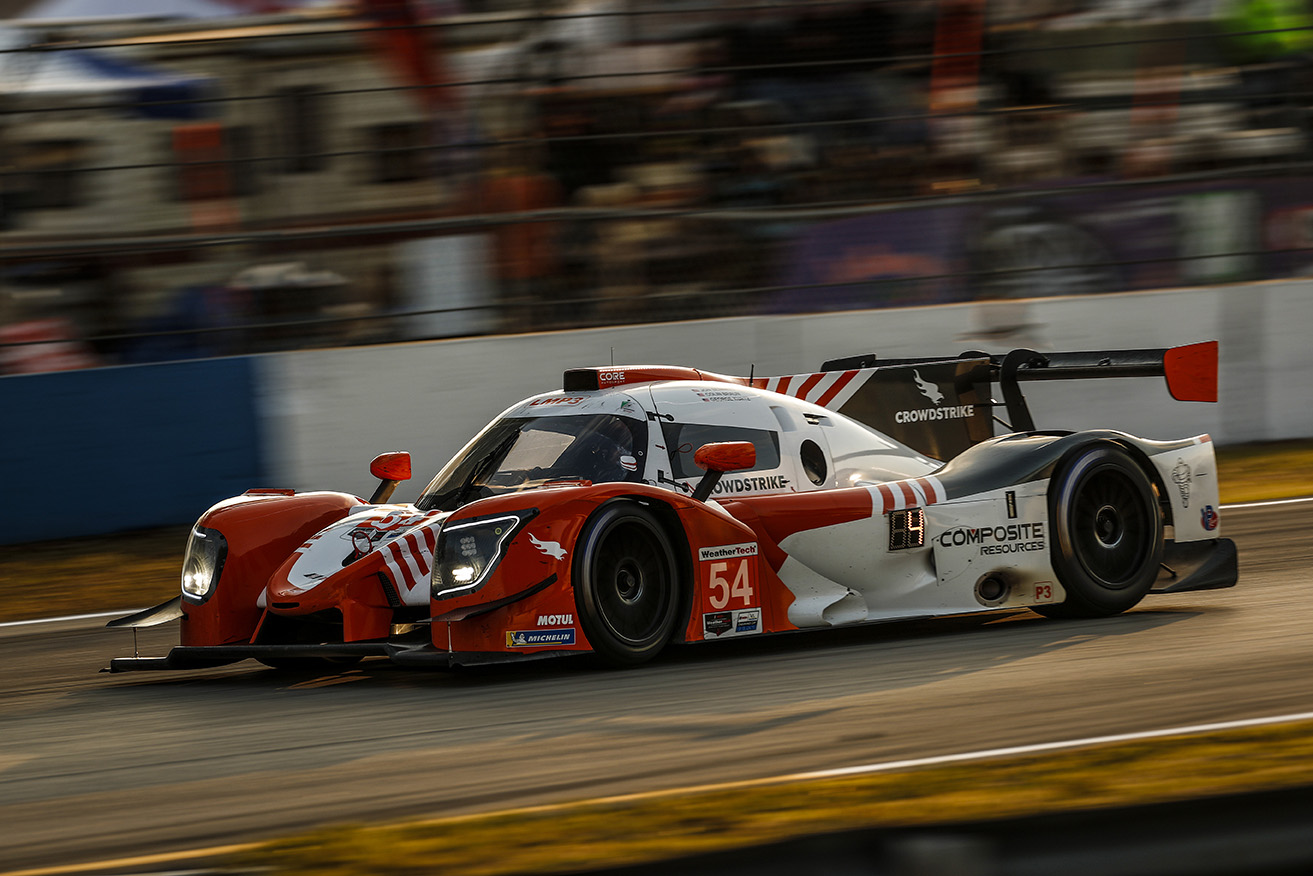 Another victory for Ligier in the 12 Hours of Sebring with a 100% Ligier JS P320 podium!

17 – 20 March – Repeat performance for the French constructor.  After a 100% Ligier JS P320 podium in the IMSA Prototype Challenge last weekend at Sebring, Ligier again monopolised the podium in the 12 Hours of Sebring! The previous day the #38 Performance Tech Motorsports Ligier JS P320 clinched pole position, but in the race itself the #54 Ligier entered by American team CORE Autosport emerged victorious after 12 hours racing. The Ligier JS P320, which set the fastest lap in the race, was closely followed home by the #91 and #74 Ligier JS P320s run by Riley Motorsports, which finished second and third on the podium. It's the third time that French constructor Ligier Automotive has won the 12 Hours of Sebring, including twice in the overall classification!

On Thursday, the Ligier JS P320s dominated the free practice sessions with the #91 entered by Riley Motorsports and driven by Jeroen Bleekemolen, Jim Cox and Dylan Murry topping the time sheets in all three. Its stable mate the #74 Ligier JS P320 in the hands of Scott Andrews, Spencer Pigot and Gar Robinson slipped into second place in the second and third sessions. On Friday it was qualifying time lasting 90 minutes at the end of which the #38 Ligier JS P320 run by Performance Tech Motorsports driven by young Swede Rasmus Lindh bagged pole in 1m 56.001s.

The race started on Saturday at 10:10 local time. The #38 Ligier of Performance Tech Motorsports crewed by Rasmus Lindh, Mateo Llarena and Dan Goldburg shot into the lead and by the fifth hour it had built up a cushion of almost 30 seconds over its rivals. But the American team, which had posted stunning performances all weekend and led in the opening stages of the race, was forced to fall back and retired at half-distance due to a loss of power following contact with another car.

The #74 Riley Motorsports Ligier JS P320, which started in third place on the grid, kept up a steady pace and took third, while #91 spent the first part of the race squabbling over fifth with the #54 CORE Autosport entry of Colin Braun, George Kurtz and Jon Bennett. A yellow flag in the sixth hour gave the two Riley Motorsports driver lineups a great opportunity as they used it to carry out their obligatory 4-minute pit stop. In the seventh hour the #74 and #91 Ligier JS P320s took up the lead and set a searing pace fighting for first and second spots until the 10th hour of the race.

Another yellow flag was displayed after a DPi stopped on the track. The #54 CORE Autosport Ligier that had been in fourth place took advantage of a pit stop by the leaders to fight for a place on the podium. It was the start of a no-holds-barred scrap between the #91 and #74 Riley Motorsports Ligiers and the #54 CORE Autosport JS P320. With less than an hour to go to the chequered flag #54 took the lead with #91 and #74 glued to its gearbox.

The next and last yellow flag was waved just 20 minutes from the end. The #54 Ligier JS P320 made no mistakes on the tricky restart procedure, held on to its first place and won the 12 Hours of Sebring in the LMP3 category. “I think the turning point came toward the end when we got a couple yellows that allowed us to get back on the lead lap. Once you get back on the lead lap, you have a fighting chance. I just put my head down and tried to get up there”, said George Kurtz, who was taking part in the 12 Hours of Sebring for the first time. CORE Autosport also set the fastest lap in the race thanks to Colin Braun who got round in 1m 56.166s in front of three more Ligier JS P320s.

The Riley Motorsports team scored a double podium finish with the #91 Ligier JS P320 in second place and #74 third: only 0.516 seconds separated the two crews! The #33 Sean Creech Motorsport Ligier JS P320 flirted with the top 3 for most of the race after starting in sixth position. It saw the flag in fifth spot after being delayed by several penalties imposed by Race Control.

Thus, Ligier Automotive won the iconic 12 Hours of Sebring for the third time in its history. In three different categories what's more! The first time was in LMP2 with the victory in 2016 of the #2 Ligier JS P2 entered by Tequila Patrón ESM and driven by Ed Brown, Pipo Derani, Johannes van Overbeek and Scott Sharp. The second success came in 2018 in DPi with the #22 Ligier Nissan DPi crewed by Pipo Derani, Johannes van Overbeek and Nicolas Lapierre. And now in the LMP3 category which is in only its first year in the American Championship. For the French constructor it's also the second 100% Ligier JS P320 podium in a week after the IMSA Prototype Challenge race on 12 - 13 March on the same circuit, the Sebring International Raceway.

The next round of the IMSA WeatherTech SportsCar Challenge will take place on 14-16 May on the Mid-Ohio Sports Car Course.