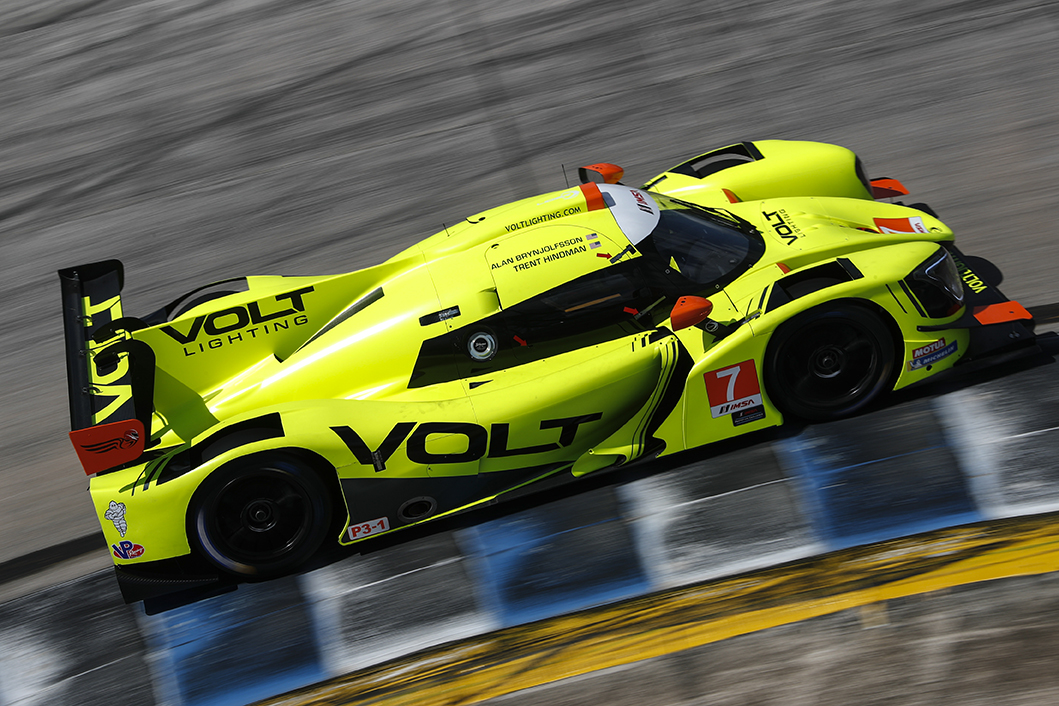 12-13 March 2021 – Second round of the IMSA Prototype Challenge, the American Championship dedicated to the new and older-generation LMP3 sport prototypes, on the Sebring International Raceway. There were eight Ligier JS P320s in the field of 17 new-generation LMP3s and two Ligier JS P3s out of the three older-generation LMP3s. The Ligier LMP3s scored a double victory: victory in the LMP3-1 category and a 100 % Ligier JS P320 podium with #7 entered by VOLT Racing with Archangel on the topmost step followed by #6 run by Performance Tech Motorsports and the #54 MLT Motorsports entry, as well as victory in the LMP3-2 category thanks to #24 run by Sean Creech Motorsport. The #60 Wulver Racing Ligier JS P320 set the fastest lap in the race in a time of 1m 56.027s, a full second quicker than its rival chassis!

In Friday's free practice the Ligiers set the fastest times in both sessions. In the LMP3-1 category, the #7 VOLT Racing Ligier JS P320 crewed by Alan Brynjolfsson and Trent Hindman came out on top in the two sessions followed by #6 entered by Performance Tech Motorsports driven by Rasmus Lindh and Dan Goldburg. In LMP3-2, the #24 Sean Creech Motorsport Ligier JS P3 with Nigel Greensall and Francesco Melandri on board and the #50 One Motorsports Ligier JS P3 with Indy Al Miller shared the top of the time sheets in each of the two sessions.

On Saturday morning it was time for the 15-minute qualifying interlude. But it was cut short following the off of an LMP3 and this prevented the Ligier teams from concretising their performances shown in free practice. The #6 Performance Tech Motorsports Ligier JS P320 qualified in second spot in front of #54 run by MLT Motorsports with Dakota Dickerson and Josh Sarchet at the wheel, two young drivers from the single-seater nursery with the Ligier JS F4s and JS F3s in the F4 U.S. and FR Americas Championships. In LMP3-2, the #24 and #50 Ligier JS P3s also set the second and third fastest times.

Saturday afternoon was the theatre of the second 1h 45m round of the championship. There were several neutralisations so the race was won both on the track and in the pits where the pit stop strategies proved crucial in deciding the outcome. And it was at the moment of the third neutralisation that the race was flipped on its head! The #7 VOLT Racing with Archangel Ligier JS P320 had just pitted to carry out its driver change, but out on the track the leaders decided not to stop immediately. This enabled #7 to take second place before another neutralisation intervened. On the restart #7 grabbed the lead where it stayed until the end of the race. It crossed the finishing line in first place with 9,390s in hand over the #6 Ligier and more than 23 seconds in front of the first rival chassis. It was a really stunning performance for the team and its two drivers more accustomed to GT4 who are making their debut in the LMP3 category this year with their new Ligier JS P320. "It's awesome to get a win so early in our evolution into the LMP3 category," Brynjolfsson said. "I knew we had a great car. Trent showed that he was one of the fastest, or the fastest driver out there, and I was confident in our team and strategy. I had a really easy job just to be clean and that's it. So, it was a pretty easy race for me and I give all the credit to Trent, the team and the car."

The #6 Performance Tech Motorsports Ligier JS P320, in second place for most of the race, could have fought for the lead had it not been slowed by a car which, after passing under double yellow flags, took a long time to serve its drive-through penalty. Rasmus Lindh lost time and dropped 8 seconds behind the leader so the team was unable to close the gap and saw the flag in second place. “That was a tough end to the race as we got purposely held up by the car ahead,” Goldburg said. “It had passed us and the No. 7 under yellow but refused to pit for its penalty. It then proceeded to hold us up for nine seconds creating a major gap to the leader. We had to work with race control in order to get them to actually serve the penalty. After that Rasmus got to work making up time but there was just too large of a gap to the leader. It's still great to finish on the podium with Motel 6, let's hope for better sportsmanship at Mid-Ohio!”

MLT Motorsports and their #54 Ligier JS P320 were in third place on the grid where they finished after fighting at the front throughout the race. Thanks to this result the team is now in the lead in the overall classification.

After starting the season in the LMP3-2 category, Wulver Racing moved up to the LMP3-1 category for the second round with its brand-new #60 Ligier JS P320, which it received last week and which was driven by Bruce Hamilton and Tonis Kasemets. And the team has already laid down a marker by setting the fastest lap in the race in 1m 56.027s, a second quicker that the rival chassis!

In the LMP3-2 category, Sean Creech Motorsport and its #24Ligier JS P3, who were having their very first race of the season in the IMSA Prototype Challenge, finished first and set the fastest lap in the race in 2m 00.184s. It was also Nigel Greensall and Francesco Melandri maiden win in the series. "It means everything to me," Melandri said. "It's my first pro race. We've been practicing and wanted to run in 2020. We all know what happened there. So, it's just fantastic to come out. Sean Creech Motorsport put a great car together for us, and I couldn't be happier co-driving with Nigel successfully for the first time out."

Indy Al Miller at the wheel of the One Motorsports #50 Ligier JS P3 led the first part of the race and finished third after a spin.

Next week on 17-20 March the Ligier JS P320s will be back on the Sebring International Raceway for the 12 Hours of Sebring in the IMSA WeatherTech SportsCar Championship.

The third round of the IMSA Prototype Challenge will be held on 14-16 May on the Mid-Ohio Sports Car Course.