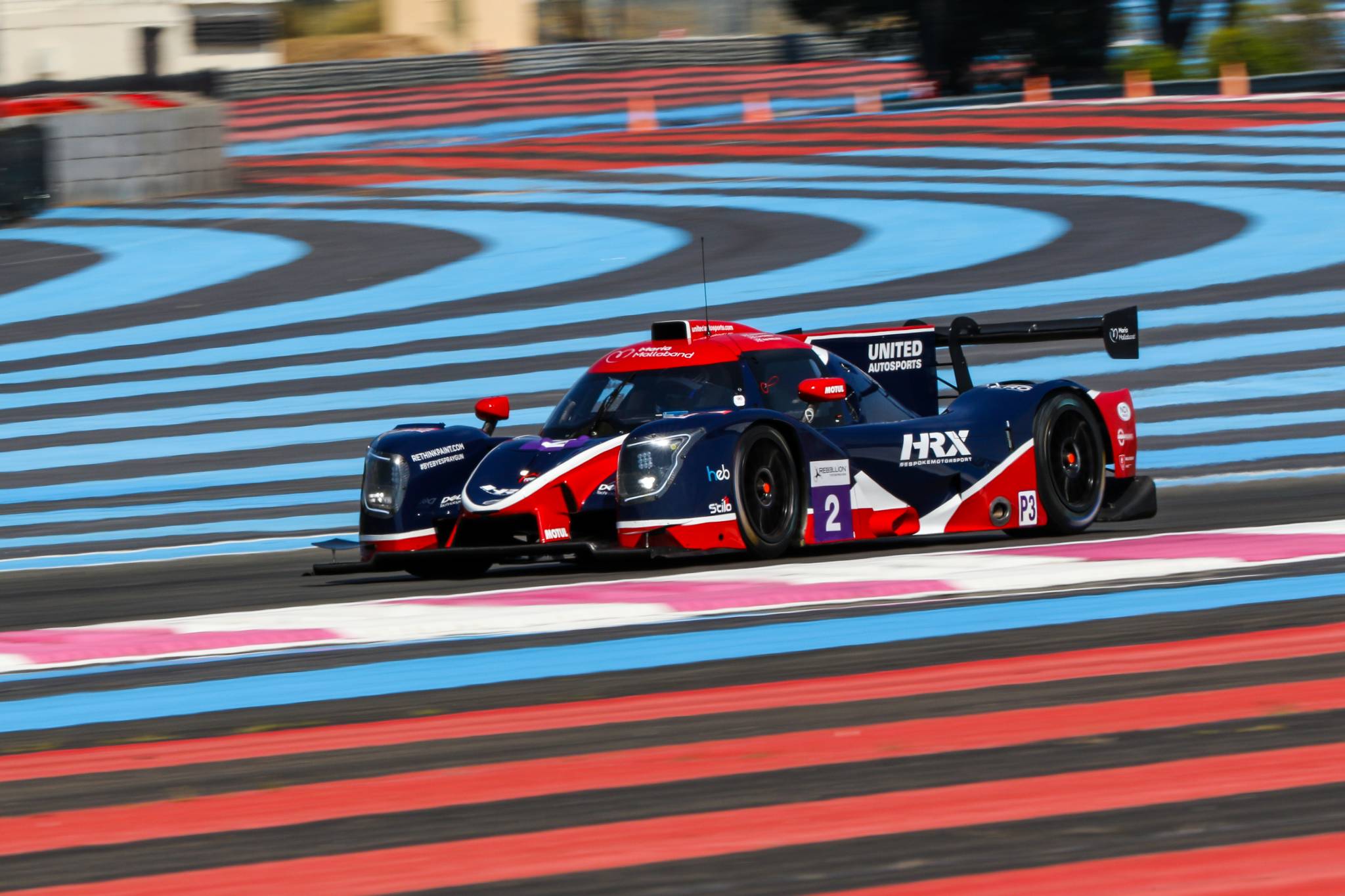 19 July 2020: This weekend the Ligier JS P320 made its racing debut on the Paul Ricard circuit in the opening round of the 2020 European Le Mans Series. There were 12 LMP3s: eight Ligier JS P320s against four Duqueine 08s. The #2 United Autosports JS P320 scored the first victory of the season after clinching pole position and setting the fastest lap. #13 entered by Inter Europol Competition and #15 run by RLR MSport rounded off the top 3. Seven Ligier JS P320 filled the first seven places and all eight cars crossed the finishing line without suffering any mechanical problems. This is a result that is more than just satisfactory. The Ligier JS P320 is quick out of the box and has passed its first test with flying colours!

The start of the first four-hour race of the year was given at 11:00 on 19th July. Right from the very start the pack of Ligier JS P320s took over the front-running positions, which they never relinquished as they led the dance from start to finish.

Tom Gamble in the #2 Ligier JS P320 entered by the Anglo-American team shot into the lead in the category followed by the #4 DKR Engineering Duqueine 08. Five Ligiers filled the next five places: Malthe Jakobsen in the RLR MSport #15, David Droux in #8 run by Realteam Racing, Andrew Bentley at the wheel of the United Autosports #3, Thomas Erdos in #11 entered by Eurointernational and Martin Hippe in the Inter Europol Competition #13, which had all been covered by a pocket handkerchief in qualifying on Saturday!

At the end of lap 1, the #4 DKR Engineering Duqueine 08 fell back to fifth and went on to finish tenth in the category.  The first of the four Duqueine 08s, the Nielsen Racing #10, saw the flag in eighth place.

The Ligier JS P320s in the leading group, #2, #15, #8 and #13, were locked in battle right till the very end and swapped places on a regular basis as pit stops intervened for driver changes and race neutralisations.

The first pit stops were followed by the race being neutralised, which flipped the order. Into the lead went the RLR Msport #15 followed by #8 run by Realteam Racing, United Autosports' #2, and #13 from the Inter Europol Competition stable. #8 lost a place due to a drive-through penalty after contact with a GT before the deployment of the safety car, after one-and-a-half-hour's racing reduced #15's lead by a considerable margin. #2 took advantage of this to up the pressure and managed to slip past. #15 retook the lead after a further pit stop.

Following the competition of the final round of pit stops #13 run by Inter Europol Competition with Nigel Moore at the wheel was in first place. Wayne Boyd in #2 then went on the attack and although Nigel Moore put up stiff resistance he was obliged to give way with 17 minutes to go to the chequered flag.  There were no further position changes until the end of the race and #2 entered by United Autosports and driven by Wayne Boyd - Tom Gamble - Rob Wheldon scored the first victory of the season. Nigel Moore and Martin Hippe in the #13 Inter Europol Competition Ligier JS P320 took second place on the podium joined by James Dayson and rookie drivers  Ryan Harper-Ellam and Malthe Jakobsen in the #15 RLR MSport entry completing the top 3.

Into fourth came the #8 Realteam Racing Ligier JS P320 in the hands of Esteban Garcia and David Droux equalling their best finish in LMP3 since their debut in 2019. The driver lineup consisting of brothers Arnold and Maxime Robin having their maiden outing in the ELMS and Vincent Capillaire in the #9 Ligier JS P320 run by Graff came home in a promising fifth place. Reigning champion, Italian team Eurointernational, was unable to fight at the front with its two drivers Niko Kari and Thomas Erdos as the latter was suffering from two broken ribs after an unlucky accident sustained in the paddock on Saturday. The team finished in sixth place in its #11 Ligier JS P320.

Inter Europol Competition also entered a Ligier JS P217, #34 driven by Jakub Smiechowski, Rene Binder and Matevos Isaakyan. It finished in an encouraging seventh place overall. It was the team's first top-10 finish in the general classification and was a fitting reward for their continued improvement since their debut in LMP2 in 2019.

“My first race with United was really good. We've been fast all weekend. We had one goal for the race. Wayne did a great job in qualifying which made my job of starting the race easier. Then the race itself, we got off to a really good start and I managed to build a gap. We got unlucky with the safety car too, pitting before it came out. Rob had a great stint then Wayne managed to put in a fantastic final stint to get us back into the lead and bring home the win.”

“An interesting start to an interesting season with a delayed start. P2 is a good result for the start. We have to improve our speed a bit more though to catch the United guys. Congratulations to them, they did a good race today. We will work hard and fight them more in Spa.”

“It feels surreal! To achieve a podium at this level you need everything to work perfectly and for everyone to be on point, and RLR MSport did a fantastic job. The #15 Ligier JSP320 has been awesome all weekend, and having been really smart in testing, we came with a fantastic baseline setup that we knew would be strong on high fuel and old tyres. I was the only one to double-stint the tyres and the car was fantastic for the most part. I just focused on driving smart, not making any risky passes. Today's performance bodes well for the rest of the season and I'm feeling very confident.

The Ligier JS P320s did not manage to transform their stunning performances in the four practice sessions for the Michelin Le Mans Cup into the success they deserved. The #69 Cool Racing Ligier JS P320 was robbed of victory by a puncture on the last lap. Despite this, the French constructor was rewarded with a couple of good results thanks to the second and third places scored by the #98 Motorsport98 and the #26 Graff Ligier JS P320s respectively.

The Ligier JS P320s made a flying start to the first round of the 2020 Michelin Le Mans Cup as the cars set the fastest times in the two official practice sessions on 16th July; and followed this up with the quickest times in the free sessions on 17th July. The #23 Ligier JS P320 entered by United Autosports for John Schauerman-Wayne Boyd emerged fastest over the two days with a lap in 1:48.299.

Despite these performances, the #37 Cool Racing Ligier JS P320 driven by Nicolas Maulini and Edouard Cauhaupe missed out on pole by only 43/1000s! And nothing turned out as hoped in the race itself on Saturday 17 July.

The #37 Ligier JS P320 was unable to take advantage of its place on the front row as it had to start from the pit lane a lap behind its rivals due to an engine mapping problem, which prevented it from taking up its place on the grid. In the race another car slammed into it causing its retirement.

Another stroke of bad luck hit the Ligiers at the end of the first race of the season. It looked like the #69 Cool Racing Ligier JS P320 driven by Ben Barnicoat and Maurice Smith was on the way to victory until the British driver had to pit following a puncture in the dying seconds. It eventually finished sixth.

The #98 Motorsport98 Ligier JS P320 in the hands of Eric De Doncker and Dino Lunardi had a flawless run and clinched second place 21 seconds behind the winners.  Another Ligier JS P320, #26 entered by Graff, filled the final spot on the podium thanks to Rory Penttinen and Mathias Kaiser.

The #27 Ligier JS P320 entered by MV2S Racing for Christophe Cresp and Bruce Jouanny, which crossed the line in third place, was handed a 30-second penalty after the race for not respecting the regulation pit stop time. This dropped the pair back to seventh behind #24 run by United Autosports for Daniel Schneider and Andrew Meyrick. It was, however, a promising performance by the team making its debut in the LMP3 category.

“What a week! After our misadventures in the Michelin Le Mans Cup, I'm absolutely delighted to see the performances shown by the Ligier JS P320 in practice have been rewarded as well as the teams that have put their trust in us. Clinching the first seven places in the first race of the

Rendezvous for the next round of the ELMS and the Michelin Le Mans Cup on 7-9 August at Spa-Francorchamps.