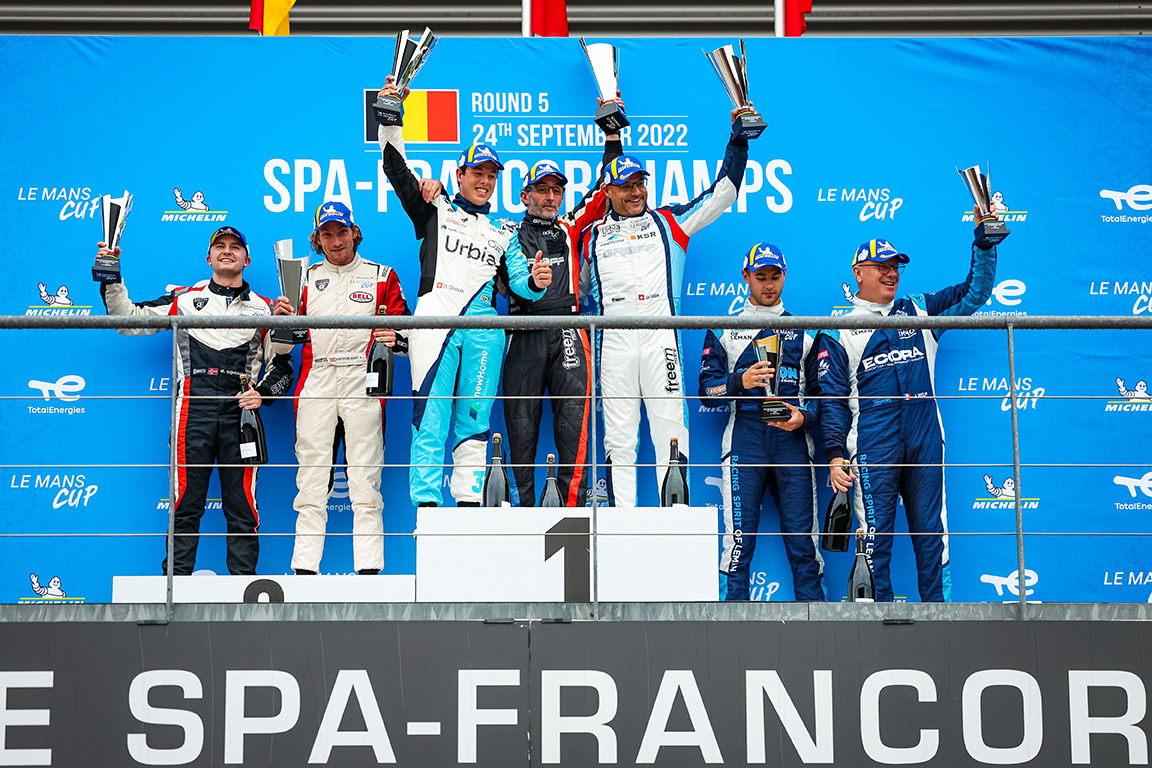 Le Mans Cup: Graff Racing takes a last-lap victory at Spa; Spirit of Leman clinches the title ahead of the season finale

24 September 2022 - The penultimate round of the 2022 Michelin Le Mans Cup season took place at the Spa-Francorchamps circuit in Belgium. It was an eventful race with several safety car periods and many surprises, even on the last lap. The #76 Reiter Engineering Ligier JS P320 started from pole position and led the race until the last lap when it was overtaken by the #40 from Graff Racing. The #43 Spirit of Leman Ligier JS P320 completed the podium ahead of four other Ligier JS P320s. The second Spirit of Leman car, the #10, finished the race in sixth place, after an impressive drive from 18th place, to secure the Michelin Le Mans Cup title for the French team, one meeting before the season finale in Portimão.

On Saturday morning, Reiter Engineering secured its second pole position of the season with Freddie Hunt in the #76 Ligier JS P320. On a wet track, the son of Formula 1 World Champion James Hunt set the fastest lap of 2:14.833s.

The 110-minute race started at 4:05 pm and began behind the safety car, following a heavy downpour before the start. The race went green 15 minutes later. The #76 Reiter Engineering Ligier JS P320 with Freddie Hunt at the controls held onto the lead and was pulling away from the rest of the field. But soon, just five minutes later, there was another intervention of the safety car, following the exit of the #6 ANS Motorsport Ligier JS P320. The minutes ticked by. A 22-minute neutralisation.

The teams took advantage to make a pit stop. Freddie Hunt handed over to Mads Siljehaug. Still in the lead, the Norwegian driver took off. He now had a 30-second lead over the #40 Graff Racing Ligier, with David Droux taking over from Luis Sanjuan.

With 33 minutes remaining in the race, there was another safety car period, with the race neutralised for ten minutes. On the restart, the #40 Graff Racing Ligier JS P320 slid into the #76. With five minutes to go, David Droux stepped up his attacks. The pressure was mounting. Mads Siljehaug resisted. But on the last lap, a slight bobble from the Norwegian allowed David Droux to take the lead. A last-minute win for the #40 Graff Racing Ligier JS P320. The first for the team this season.

Although victory eluded them, the first-year team in the championship and the LMP3 category, Reiter Engineering, showed, once again, that they are a formidable team. With its second place already in race 2 of Road to Le Mans and its two pole positions, Reiter Engineering is now second in the provisional championship classification (48 points).

Racing Spirit of Leman made it a Ligier JS P320 lockout of the podium with the #43 of Jacques Wolff and Josh Skelton. The #7 Nielsen Racing car (Colin Noble / Tony Wells) finished fourth ahead of the #69 COOL Racing entry (Maurice Smith / Malthe Jakobsen). Malthe Jakobsen set his second-fastest race lap of the year in 2:30.241s.

At the top of the provisional classification, the #10 Racing Spirit of Leman Ligier JS P320 (Alexander Mattschull / Tom Dillmann), which started 18th on the grid, made a terrific come-back through the field to finish in sixth place. That is all the team needed to secure the 2022 Michelin Le Mans Cup title at Spa-Francorchamps. With two wins and a third-place this season, the team has accumulated 82 points after Spa.

The #29 MV2S Racing Ligier JS P320 (Louis Rousset / Jérôme de Sadeleer) finished seventh and is now third in the provisional classification, just one point adrift of the #76 Ligier. Three other Ligiers are closely bunched behind with the COOL Racing #69 (41 points), the Racing Spirit of Leman #43 (39 points) and Nielsen Racing #7 (37 points).

Second and third place in the championship will be decided among these five Ligier teams in the final race on the undulating Portimão circuit in Portugal on 16 October.