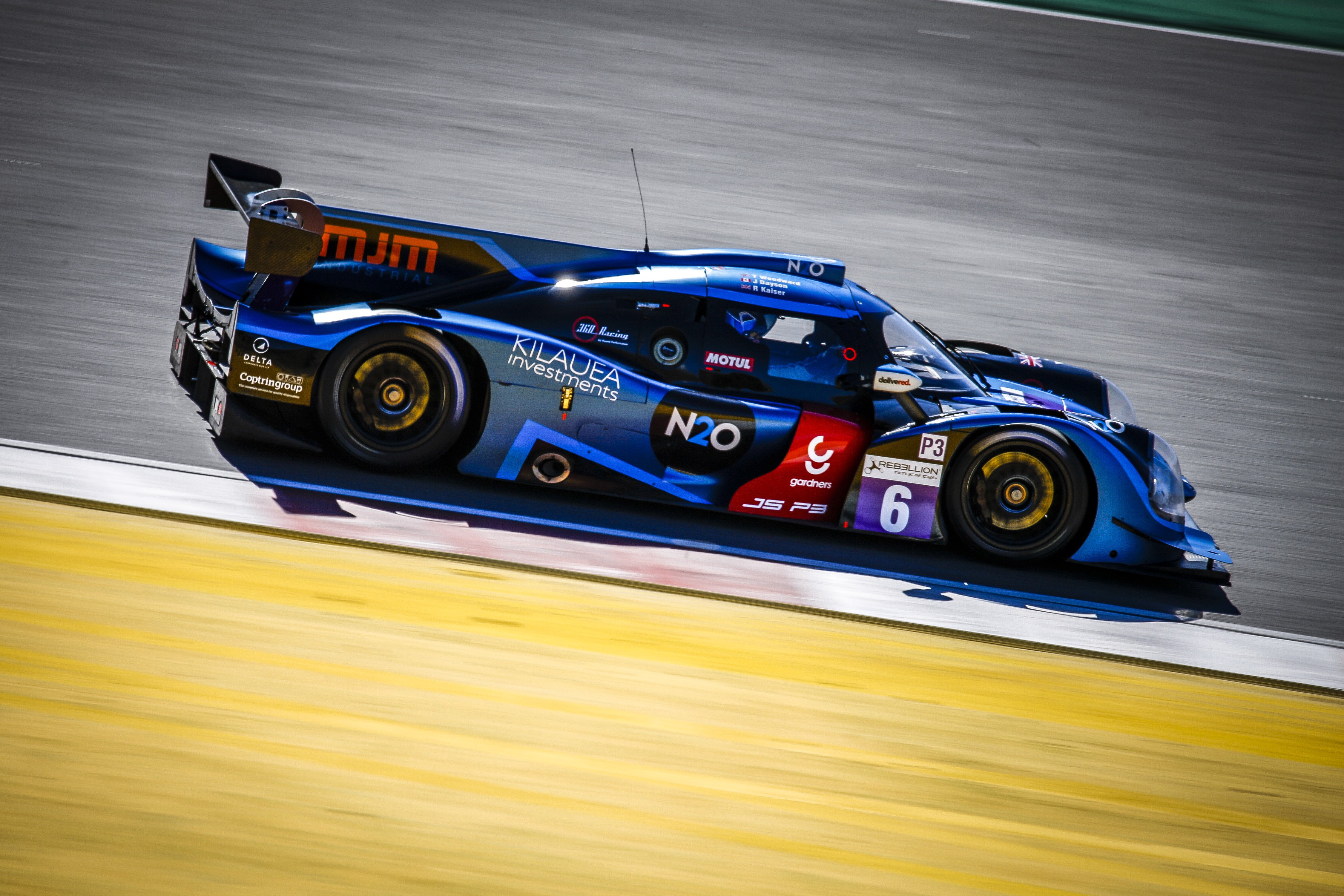 The Ligier JS P3 scores a double victory at Portimao and clinches the ELMS LM P3 title for the fourth year running!

25-27 October 2019, last round of the European Le Mans Series and the Michelin Le Mans Cup on the Portimao circuit in Portugal and the final outing of the Ligier JS P3 in these two championships. The finals were full of non-stop action, which didn't prevent the Ligier JS P3 from dominating, winning the LM P3 title for the fourth year running, and clinching a double victory and a double. The Ligier JS P3 has fulfilled its mission! In LM P2, the Panis-Barthez Compétition Ligier JS P217 fought at the front and led the race for several laps. A great way to end the season in a blaze of glory!

These last two races marked the end of the Ligier JS P3's career in these two championships. The Ligier JS P3 was launched on the circuits in 2016 and it quickly conquered drivers and teams as an easy to operate, reliable and competitive race car. And it proved itself in endurance racking up a stunning set of results!

The Ligier JS P3 finished big winner in the Eurpoean Le Mans Series. It swept the board in LM P3 with 100% of the LM P3 titles, 89% of the possible podiums and 22 victories in the 24 events of the four seasons in which it raced since 2016!

The Ligier JS P3 also conquered the United States winning the IMSA Prototype Challenge title two years on the bounce as well as Asia with the title in the Asian Le Mans Series four years running.

Next year, the Ligier JS P320, unveiled at the 24 Hours of Le Mans in 2019, will take up the running in the European Le Mans Series and the Michelin Le Mans Cup. It is just as reliable and easy to operate, but more powerful so it looks like a great future lies in store for the Ligier JS P320. It will be in action as of today on the Portimao circuit for three days' testing for clients and development with two chassis.

In the meantime a look back at this weekend's two races. And what races!

European Le Mans Series: Double for the Ligier JS P3 thanks to 360 Racing and United Autosports and the LM P3 title

A thrilling final! While Ligier was already assured of the LM P3 title since the second-last round on the Spa-Francorchamps circuit, two Ligier teams, Eurointernational and Inter Europol Competition, were dead-heating in the title chase. It promised a no-holds-barred battle on the track – and that's how it turned out!

The race got off to a chaotic start as on the first lap a car spun and stopped in the middle of the track. The #3 United Autosports Ligier JS P3 driven by Christian England couldn't avoid it and the inevitable collision occurred. Several GTs were also involved in the incident and the red flag was hung out. Hardly had the race begun when it was already stopped!

After 55 minutes the race was restarted behind the safety car. The #11 Eurointernational Ligier JS P3 took the lead in LM P3 with Mikkel Jensen at the wheel who had slipped past all his rivals at the start of the race. The team decided to bring him in and Jens Petersen got behind the wheel.

After over an hour the green flag was waved and just under three hours racing remained.

A few minutes later, the safety car was back on the track after a GT went off. The #11 Eurointernational Ligier JS P3 was blocked behind the safety car and the leading LM P3s were behind it. Green flag - 2h35m to go! The #2 United Autosports Ligier JS P3 driven by Wayne Boyd, Garett Grist and Tommy Erdos was third followed by the #15 Ligier JS P3 run by RLR Msport for Martin Vedel Mortensen, Christian Olsen et Martin Rich and #13 entered by Inter Europol Competition with Martin Hippe and Nigel Moore at the wheel. Its sister car #14 was seventh in front of 360 Racing's #6 with Terrence Woodward, James Dayson, Ross Kaiser and Eurointernational's #11.

In LM P3, the #2 United Autosports Ligier JS P3 was battling for second place. The #15 RLR Msport Ligier JS P3 just behind closed the gap but an LM P2 punted it into a spin damaging the car that had to pit. The team's hopes of a podium evaporated. Full Course Yellow to extricate the LM P2 for the gravel trap.

The race restarted with less than 1h45m racing to go. The #13 Inter Europol Competition Ligier JS P3 caught its rivals and overtook the #6 Ligier JS P3 entered by 360 Racing to snatch second place before taking the lead in the category.

Another yellow flag. The Duqueine was in the tyre wall. One hour to go. Some teams used the incident to carry out pit stops. 360 Racing and its #6 Ligier JS P3 emerged in the lead in LM P3 followed by the #2 Ligier JS P3 run by United Autosports and #13, the Inter Europol Competition Ligier JS P3.

But there was a big upset after the race. With the red flag procedure the minimum driving time for the teams' Bronze drivers was readjusted and the #13 Inter Europol Competition's Ligier JS P3's team is said not to have respected this time. The decision was handed down: it was given a nine-lap penalty. It finished in last place in LM P3 behind the Eurointernational Ligier JS P3, which would thus win the LM P3 title and the invitation for Le Mans!

Inter Europol Competition has appealed this decision and at the moment the winner of the LM P3 category has not yet been announced.

The Ligier JS P3 also took part in the sixth and last race of the Michelin Le Mans Cup, with the same ending: a victory for the Ligier JS P3!

The #14 RLR Msport Ligier JS P3 driven by Alex Kapadia and Rob Wheldon made a quick incisive start from third place and slotted into second in the second corner.

After just under 30 minutes racing the first yellow flag was hung out and it was quickly transformed into a Full Course Yellow after a Norma went off. The #14 RLR Msport Ligier JS P3 was still lying second five seconds behind the leader. The #90 AT Racing Ligier JS P3 with Alexander Talkanista father and son at the wheel was now sixth after setting off in eighth place.

One hour's racing to go. RLR Msport's #14 Ligier JS P3 retook first place after the teams' final pit stops. It now led its pursuers by 10.727 seconds. The #90 AT Racing Ligier JS P3 was sixth in front of the #74 Cool Racing driven by Maurice Smith and Victor Blugeon, and #98 Motorsport98 of Eric de Doncker and Dino Lunardi.

40 minutes to go. The #25 and #3 Normas were at it hammer and tongs for second place and went off tagging each other in the process. #25 ended up in the gravel trap.

Only 30 minutes left. RLR Msport was in the lead with over 25 seconds in hand looking unbeatable.

With 12 minutes to the chequered flag there was a Full Course Yellow to clear debris off the track following previous contacts. The race restarted with only six minutes left.

The #14 RLR Msport Ligier JS P3 crossed the finishing line 18.951 seconds in front of the #2 Norma. It was the third consecutive victory of a Ligier JS P3 on the Portimao circuit in the Michelin Le Mans Cup. The #98 Motorsport98 and the #90 AT Racing Ligier JS P3s came home in fourth and fifth places. Six Ligier JS P3s finished in the top 10 ending the Ligier JS P3's career in the championship in a blaze of glory!

The #23 Panis-Barthez Compétition Ligier JS P217 had a great race. With Konstantin Tereschenko and then Timothé Buret at the wheel, the car was fighting at the front and led the race for several laps. After the yellow flags, the safety car at the end of the race and pit stops it saw the flag in eighth place.

The #34 JS P217 Ligier run by Inter Europol Competition and Jakub Smiechowski, Sam Dejonghe and Mathias Beche also had a solid weekend with the fourth-quickest time in the first free practice session. They had a good pace in the race until the left-hand front suspension weakened in a contact provoked by a rival gave way and the team was forced to retire with 2h11m racing still to go.

Rendezvous in April 2020 for the next European Le Mans Series and Michelin Le Mans Cup!

For more information on the Ligier JS P320: