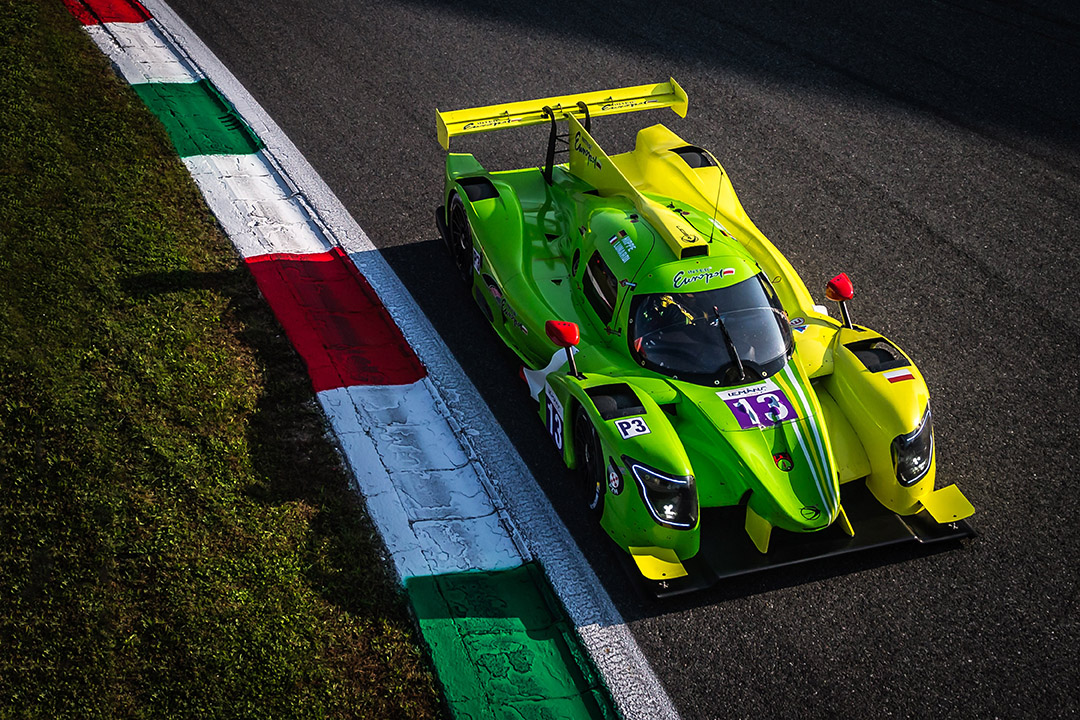 The win and top 5 at Monza in ELMS, two Ligier JS P320s on the podium in LMC.

October 9-11, 2020 – Total domination by the Ligier JS P320s in ELMS on the extremely fast Monza circuit in the penultimate round of the season with the best times in practice, qualifying and a sweep of the top five in the LMP3 category. The #13 Inter Europol Competition entry takes a stellar victory ahead of the #11 from the Eurointernational team and #2 United Autosports car. In LMC, the Ligier JS P320 narrowly misses out on victory, but does claim two well-deserved spots on the podium with the #37 Cool Racing and #26 Graff cars.

ELMS: Fourth consecutive victory and a lockout of the top 5 at Monza for the Ligier JS P320s

The Ligier JS P320s had a tremendous weekend in round four of the ELMS with an imposing sweep of the top five. Martin Hippe and Dino Lunardi in the #13 Inter Europol Competition entry, returned to the top step of the podium for the first time this season. The trio of Baratto, Kari and Maulini finished second, despite harassment from the #2 United Autosports machine, driven by Wayne Boyd, Tom Gamble and Rob Wheldon. Esteban Garcia and David Droux in the #8 Realteam Racing JS P320, followed by the Robin brothers and Vincent Capillaire in the #9 Graff complete the top five. The race for the championship is not yet over and four Ligier JS P320s will battle for the title in the season finale at Portimão.

In the collective tests and free practice sessions the #8 Realteam Racing, #2 United Autosports and #11 Eurointernational Ligier JS P320s all took a turn at the top of the timing screen. In qualifying, the leader of the general classification, Wayne Boyd set a time of 1:43.017s in the #2 car to secure the third pole of the season for United Autosports and Ligier's fourth. Malthe Jakobsen in the #15 RLR MSport car was second fastest with a lap of 1:43.278s.

It wasn't raining but the track was damp when the green flag waved on Sunday October 11 at 11:00 am. It was however quite tricking depending on trye selection. The incidents came early and immediately shook up the race order. James Dayson in the #15 Ligier JS P320 spun and fell a lap behind. It was also a rough start for the #8 Realteam Racing Ligier JS P320 with Esteban Garcia behind the wheel and the #3 United Autosports entry, with James McGuire aboard, which dropped to the rear of the field.

On the other hand, Rob Wheldon in the #2 United Autosports sister JS P320 held firmly onto the lead and Arnold Robin in the #9 Graff Ligier JS P320 did himself well in the very hectic start of the race. Starting nineth, he shot up to second position in the category. Jacopo Baratto in the #11 Eurointernational Ligier JS P320 also started strong as he moved from tenth to fourth place. Martin Hippe in the #13 Inter Europol Competition Ligier JS P320 followed the lead of the #11 car and picked up three places. After barely two minutes of the race, the safety car was called into service to allow for the removal of an LMP2 car.

Very soon after the re-start, the #2 United Autosports, the #11 Eurointernational, and the #13 Inter Europol Competition Ligier JS P320s were battling for first place.

At the end of hour one the race was neutralised after the #3 United Autosports car made contact with a GT competitor. Sanctioned with a stop and go penalty, the #3 crew of Bentley, Tappy and McGuire remained at the tail end of the field for the rest of the race.

Pit stop strategy and several full course yellows spiced up the battle among the three leading Ligiers that alternated the top places. In the end it was Martin Hippe and Dino Lunardi in the #13 car winning its duel with Niko Kari in #11 Eurointernational entry. Shod on slick tyres at the start despite a still wet track surface, and with the team's excellent strategy, the JS P320 of the Polish Inter Europol Competition outfit dominated the final third of the race. Dino Lunardi took the chequered flag with a 20-second lead from the #11 Eurointernational Ligier. Finland's Niko Kari in the #11 car fended off all the attacks from Wayne Boyd in the #2 car. Eurointernational finished runner-up by a mere 0.062s ahead of their rivals from United Autosports.

Esteban Garcia and David Droux in the #8 Realteam Racing Ligier JS P320 overcame a difficult start of the race and never stopped making up lost ground to the leaders. David Droux clocked the fastest lap of the race in 1:45.344s. The #8 finished just off the podium in fourth place ahead of the #9 Graff Ligier JS P320. Brothers Arnold and Maxime Robin and Vincent Capillaire completed the top 5 ahead of the first of the Duqueine 08s, which finished a lap down to the winners.

The#15 RLR MSport driver trio of Dayson, Jakobsen and Grinbergas had to settle for nineth place, despite all the efforts to make up for the lap lost at the start. The #16 BHK Motorsport Ligier JS P320 rounded out the top ten.

The final round at Portimão on October 31st will be decisive in the battle between the Ligier JS P320s for the title. While the #2 United Autosports crew has a ten-point lead, all the Ligiers at the top of the points table still have a shot, beginning with the #13 Inter Europol Competition squad. Seven of the eight Ligier JS P320s entered in ELMS occupy the top seven positions in the Teams Championship, with 19 drivers in the top 12.

For the LMP3 category winner at Monza, Inter Europol Competition, it was not the same story in LMP2. The Polish team competes in two ELMS categories. It also entered an LMP2, the #34 Ligier JS P217. Alas, they had bad luck all weekend long. During the second free practice session on Saturday, Matevos Isaakyan had a violent accident that obliged the team to rebuild the car overnight. Starting on the last row after not participating in qualifying, Rene Binder got an excellent start and was followed by a strong stint from Jakub Smiechowski, it climbed up to fourth place and was consistently in the top ten. The loss of two rear engine covers brought an end to their hopes.

Rendezvous on November 1st, 2020 for the ELMS finale in Portimao.

Le Mans Cup: Two Ligier JS P320s in the top three, with the #37 Cool Racing and #26 Graff entries on the podium

Several race incidents disturbed the running of round five of the Michelin Le Mans Cup. They reduced the gaps that the #37 Ligier JS P320 had built over its direct rival, the #3 Duqueine 08, to zero several times, depriving the duo of Maulini and Cauhaupé a well-deserved victory. They had to settle for second place. The #26 Graff Ligier JS P320 of Penttinen/Kaiser completed the top three. The season finale in late October in Portimão will decide the title.

The Ligier JS P320s set best time in free practice and qualifying, which was a good omen for an excellent result for the French constructor and in particular for the #37 Cool Racing entry of Édouard Cauhaupé and Nicolas Maulini. Nicolas Maulini won the pole and started from row one. Two Ligier JS P320s occupied two spots on the podium, but victory escaped the #37 Ligier JS P320.

While Nicolas Maulini got a good start from pole and led the way, the #26 Graff Ligier JS P320 with Rory Penttinen was chasing after the #3 Duqueine 08, followed by the Cool Racing sister car, the #69 with Maurice Smith aboard. Two off track excursions and an accident provoked three interventions of the safety car in the first half-hour of the race, which created confusion on the track. In particular the spin of the #75 IDEC Sport Ligier JS P320 that ended up in the guardrail. Thankfully, the driver walked away, but this violent accident penalised two other Ligier JS P320s, the #23 United Autosports of Wayne Boyd and John Schauerman as well as the #27 MV2S Racing of Christophe Cresp and Fabien Lavergne, which finished at the bottom of the table. It also put an end to Nicholas Adcock and Michael Jensen's chances in the #5 CD Sport car. They were not classified.

This accident had no effect on the top three with the #37 Cool Racing still in the lead, but the intervention of the safety car erased the lead it had created. While the first stop saw first place slip away from Édouard Cauhaupé now at the controls of the #37, the youngster managed to retake the advantage from the #3 Duqueine 08.

A full course yellow at the mid-way point of the race once again reduced the gaps. Laurents Hörr in the #3 car menaced Édouard Cauhaupé and in traffic he was able to overtake the Frenchman. Despite an impressive showing, the duo of Cauhaupé and Maulini had to settle for the second step on the podium. The retirement of Maurice Smith and Matt Bell in the #69 sister car added to the woes for the Swiss squad. After a very good opening hour from the bronze driver Smith, Bell was in third place and a double-podium result was looking good, when after the final pit stop the car refused to start. The mechanics were hands on to give it a push start knowing that would result in a penalty. And the #69 car received a stop and go and finished nineth. This worked in favour of the #26 Graff Ligier JS P320 driven by Matthias Kaiser and Rory Penttinen. After a solid race, they claimed the final podium spot.

Eric De Doncker in the #98 Motorsport98 Ligier JS P320 was also sanctioned. He lost the benefits of his very good start when the race stewards ruled it had jumped the start. Despite a drive-through penalty, Dino Lunardi and Eric De Doncker showed strong pace and drove error-free to comeback for a very honourable fifth place result.

While the #5 CD Sport was unfortunately eliminated in the first-hour incident, the #6 sister JS P320 of Wolff and De Narda finished seventh.

As for the two United Autosports Ligier JS P320s, they were very unlucky. The #23 was caught up in the accident at the start of the race and the #24 of Andrew Meyrick and Daniel Schneider retired with a mechanical problem.

Anything is still possible for the final race of the year at Portimão on October 31st for the #37 Cool Racing Ligier JS P320, although in this race the team will have to count on some luck to win the title. That it would only be fair.

Click here to get more information on the Ligier JS P320