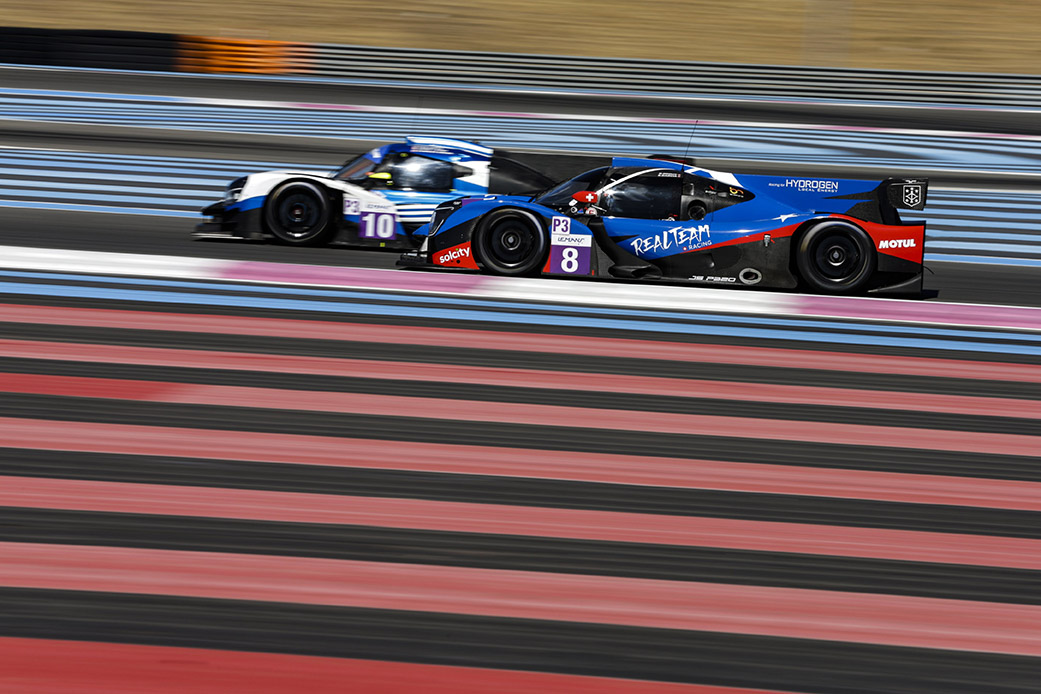 Ligier wins in dominating fashion in the return to Circuit Paul Ricard for the third round of the European championships. In both the European Le Mans Series and Michelin Le Mans Cup, the Ligier JS P320s take the top three in all the sessions and sweep the podium in the two races! In ELMS, the Swiss Realteam Racing team win both the pole and the race in the #8 JS P320. The other Swiss team, Cool Racing race to victory in the #69 Ligier JS P320 in LMC, while the #26 Graff Ligier JS P320 captures pole position.

In the second race of the ELMS season at Circuit Paul Ricard, the Ligier JS P320s dominate the top three in the category. From the collective tests, to free practice 2, qualifying, and the race despite the difficult track conditions. After securing the pole, the #8 Realteam Racing of the duo Garcia/Droux scores its maiden triumph. The #3 United Autosports driven by Tappy and Bentley finishes a close second at 2.186s behind. The #13 Inter Europol Competition of Moore-Hippe follows their British rivals to the flag at just 3.360s adrift. Incredibly small gaps in an eventful race. The #11 Eurointernational clocks the fastest lap in this four-hour race with the trio of Kari-Maulini-Baratto

Right from the start of round three of the European Le Mans Series, the Ligier JS P320s asserted themselves unambiguously for their return to the Provençal circuit of Le Castellet. They pocketed all the best lap times.

Thursday August 27, during the optional collective tests, the Ligier JS P320s set the top 3 best times. The following day in the first free-practice session, Eurointernational and the #11 of Niko Kari, Nicolas Maulini and Jacopo Baratto posted the fastest lap. In the second free-practice session, it was the turn of the #8 Realteam Racing Ligier JS P320 driven by David Droux and Esteban Garcia that impressed in the Ligier-dominated top 3. A performance confirmed in the qualifying. With a time of 2:07.207s, David Droux snatched the pole at the last minute from Malthe Jakobsen in the #15 RLR MSport car. The two Ligier JS P320s led in their wake the remaining six entered Ligiers, led by the #3 United Autosports entry, despite track conditions that became quite difficult.

On Saturday August 29, the rain came. In addition, the majority of the race was run at night. As time passed and the rain stopped, the soggy track went through different stages, which made the going particularly tricky. And the competitors had to deal with the hazards of two safety car interventions. These elements made for an eventful race.

After a few laps behind the safety car, the race went green. Rob Wheldon in the #2 United Autosports Ligier JS P320 made a brilliant start to take the lead of the race on lap four, followed by the #3 sister car. The trio of Boyd, Gamble and Wheldon seemed well on their way to another victory when, at half-distance the #2 was forced to retire with damage from contact earlier in the race, which was a huge disappointment for the leading car in the championship.

All the podium hopes for the Anglo-American team now rested with the sister car, the #3 of Andrew Bentley and Duncan Tappy, that ran consistently in the top 6. At the re-start after the safety car, following a violent accident of an LM P2 car, Duncan Tappy took the lead of the race, while the other cars pitted. Despite a final pit stop, 30 minutes from the end, he held onto the lead.

It was then a duel between the #3 from United Autosports and the #8 of Realteam Racing which after starting from pole, followed by a very difficult race, moved to the sharp end of the order. 12 minutes from the chequers, David Droux in the #8 overtook Duncan Tappy and went on for the win. A maiden victory for the Realteam Racing outfit and its duo of Droux and Garcia, in line with their performance throughout the free-practice and qualifying, and which makes up for their disappointments in the previous rounds.

Following a difficult double stint on a wet track for Martin Hippe, the #13 Inter Europol Competition Ligier JS P320 moved up to fourth then second place. In the final hour, after contact with the #16 BHK Motorsport Ligier JS P320 Nigel Moore received a drive-through penalty that saw #13 lose second place. The Polish team finished third at a tad more than 5 seconds to the #8 car.

RLR MSport and the trio of Dayson, Megennis and Jakobsen in the #15 Ligier JS P320 were caught out by the safety car. While leading the race, and about to refuel, the deployment of the safety car temporarily denied them access to the pits. At the restart, they managed somehow to avoid running out of petrol and made it to the pits, but finished just off the podium. A shame, because the British team had started on the front row after some very conclusive practice sessions and could have hoped for a podium finish.

The #11 Ligier JS P320 of the Italian Eurointernational team and defending champions finished seventh without having an opportunity to fight for very long at the front of the field, after being hit twice by the #16 BHK Motorsport car in a battle for third place early in the race, followed by a stop in the garage. Niko Kari nevertheless set the best time of the race with a lap of 1:52.228s.

The #9 Graff Ligier JS P320 with Vincent Capillaire, and Arnold and Maxime Robin was unsuccessful in concretizing its hopes of the first half of the race and finished eighth. Leading after the stops of the United Autosports cars, then at the re-start, following the second safety car period, the #9 had to finally give up its fight for the podium after being hit by an LM P2 competitor.

The #16 BHK Motorsport Ligier JS P320 driven by the trio of Veglia, Grinbergas and Adcock received a stop-and-go penalty after its second contact with the Italian car and finished in tenth place.

In the LM P2 category, the Polish Inter Europol Competition team's #34 Ligier JS P217 with Kuba Smiechowski, Rene Binder and Matevos Isaakyan started 14th. The trio finished at a very credible sixth place at the end of a solid and error-free race, with an efficient tyre strategy, despite the very difficult track conditions. It is the best result for the team in the LM P2 category this season, which is a promising sign for the future.

Cool Racing takes its second win in LMC, this time for the #69 Ligier JS P320.

Another conclusive round for the Ligier JS P320s in the Michelin Le Mans Cup, where they not only set the best times in the collective tests, free-practice, qualifying and the race, but also lockout the podium. The #26 Graff Ligier JS P320 captures pole position while the #69 Cool Racing Ligier JS P320 driven by Maurice Smith and Matt Bell takes the win. The #37 sister car in the hands of Nicolas Maulini and Edouard Cauhaupé takes the chequers in second place, but a penalty drops them to fifth, leaving the runner-up spot to the #26 Graff JS P320. This is small compensation for the crew of Matthias Kaiser and Rory Penttinen, who suffered the effects of an ill-timed safety car period. The #24 United Autosports JS P320 of Daniel Schneider and Andy Meyrick complete the podium.

While #12 Team Virage Ligier JS P320 was quickest with Julien Falchero behind the wheel in the collective tests and free-practice, it was Rory Penttinen in the #26 Graff Ligier JS P320 who won the pole. The Finn edged Nicolas Maulini in the #37 Cool Racing Ligier JS P320 by less than a tenth of a second: 1:50.909s vs 1:50.976s. Sadly, the Swiss team would experience more disappointment.

The race did not begin well for winners at Spa-Franchorchamps. The #37 Ligier JS P320 was handed a drive-through penalty for jumping the start. The #26 Graff entry led, while the #37 and #69 from Cool Racing gave chase, followed by the #24 United Autosports Ligier JS P320. At the 30-minute mark, the rain arrived and never stopped, making the race more and more perilous. Prior to the end of the opening hour, a neutralisation shook up the hierarchy. The Full Course Yellow came at the absolute worst time for the #26 Graff Ligier JS P320 as it passed the pit entry just as the pit window opened. It had to carefully complete another lap at a reduced pace. Its rivals were able to make their mandatory stops. When Matthias Kaiser finally took over in the #26, the car had lost precious time that was impossible to regain.

At half-distance, the two Cool Racing cars led the way, the #37 Ligier JS P320 of Nicolas Maulini and Edouard Cauhaupé in the lead with a nine-second gap to the #69 sister car of Maurice Smith and Matt Bell. The later passed young Cauhaupé. The Swiss team's two cars crossed the finish line in the lead and in the pits the team was about to celebrate the one-two finish when the two Ligier JS P320s were penalised for not respecting the minimum driving time for a bronze-category driver. This sanction was without consequence for the #69 car, which held on for the win, but the #37 car was demoted to fifth place.

This penalty allowed the unlucky #26 Graff Ligier JS P320 to move up to second place and offered the third step of the podium to the #24 United Autosports Ligier JS P320 of Daniel Schneider and Andy Meyrick, who struggled for a portion of the race with slick tyres in the rain and who could not have hoped for better.

The #23 United Autosports JS P320 with Wayne Boyd and John Schauerman at the controls received a drive-through penalty for causing a collision with an LM P3 car and finished nineth.

The #98 Motorsports98 Ligier JS P320 of Dino Lunardi and Eric De Doncker was in mid-field battle for a good portion of the race and was threatening the leaders in the final 30 minutes. Dino Lunardi overtook several cars and was in third place on the penultimate lap of the race. But he never saw the chequers wave, as he was victim of a switch panel issue in the final corner.

The highest finishing Duqueine 08, the # DKR Engineering entry, benefited from the penalty to the #37 Cool Racing Ligier JS P320, and inherited fourth place at 56 seconds to the winner.

The Ligier JS P320 appears to be following in the footsteps of its predecessor the Ligier JS P3! The next round is none-other then the Road to Le Mans as the curtain raiser for the 24 Hours of Le Mans, then the 4 Hours of Monza on October 10 and 11 for the ELMS and LMC.