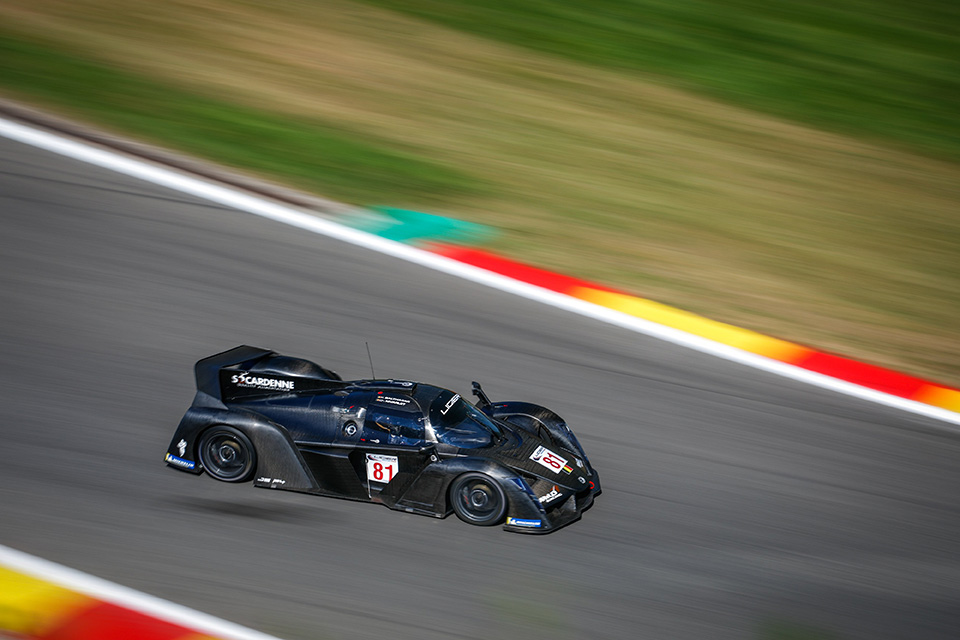 Spa-Francorchamps Races: A brace of victories for the Belgian Milo Racing #81 JS P4 and a victory each for Arctic Energy and M Racing in JS2 R.

August 8, 2020 - At round two of the Ligier European Series, the Belgian squad, Milo Racing and its driver Kevin Balthazar scored a pair of victories in the JS P4 category on home soil at Spa-Francorchamps. In JS2 R, the Russian Arctic Energy team and driver Nerses Isaakyan won race 1 while M Racing's up and coming driver, Mathieu Martins took the category honours in race 2.

9:20 am, race one of round two of the Ligier European Series. An intense one-hour race on the seven-kilometre Spa-Francorchamps circuit in the Belgian Ardennes where the temperatures were already soaring.

On row one, two Ligier JS P4s: M Racing's #16 with Sacha Lehmann at the wheel and Kevin Balthazar, alone at the commands of the Milo Racing #81, his teammate being discharged for medical reasons. The #50 Ligier JS P4 from HP Racing Team with Andrea Dromedari onboard shares row two with the first Ligier JS2 R, the #45 from MV2S Racing and category pole winner, Victor Shaytar.

In the Ligier JS P4 category the battle was on the boil right from the green flag. Andrea Dromedari surprised Kevin Balthazar, but the Belgian driver re-took the position on lap two and began to reel in Sacha Lehmann as he strung together a series of fast times, culminating with the fastest lap of the race on lap six with a time of 2:29.904s. The gaps were small but there the positions remained unchanged until the mandatory 95-second pit stops. The M Racing #16 and HP Racing Team #50 came in at the same time, ceding the race lead to the Milo Racing #81, which made the most of a clear track. The strategy paid dividends as Kevin Balthazar held on to the lead after his stop and went on for the win. Sacha Lehmann finished second at seven and a half seconds to the winner, while the #50 with Andrea Dromedari completed the podium.

The Ligier JS2 R category too had a strong and eventful start to the race. The Arctic Energy #17 driven by Nerses Isaakyan wasted no time in getting the advantage over Mathieu Martins in the M Racing #86 and set off after Victor Shaytar in the #45. The Russian driver defended his position and set a best time of 2:34.789s. The winner of both races at Circuit Paul Ricard, Sébastien Baud in the Cool Racing #74, who started sixth in the category, moved up to fourth place, ahead of Nathan Bihel in the M Racing #66. The top 5 pulled away from the field.

The pits opened at the 27-minute mark for the mandatory stops or driver changes. After all the stops where completed, the #17 of Nerses Isaakyan was in the lead, which he would not relinquish The Cool Racing #74 moved up to second place ahead of the #86, but a seven-second stop and go penalty for not respecting the minimum time in the pits dropped Sébastien Baud to fifth place. However, he wasn't discouraged and battled his way back up to third place. The M Racing #86 and Mathieu Martins finished second. Bronze medal driver Mikhaïl Makarovskii in the MV2S Racing #45 crashed on the last lap in the Raidillon, and was not classified in the results. There was disappointment as well for the #46 sister car of Antoine Chapus and Laurent Richard who were not classified either. The Bihel father and son duo in the M Racing #66 finished just off the podium, ahead of the teams second Ligier JS2 R, the #69 with Laurent Millara behind the wheel.

“It was really tough. In the cockpit, the temperature reached something like 65 degrees. But I kept a good pace during all the race. It's a pity that I drive it all. My teammate was not available this weekend. I want to say hi to him. I'm gonna see him in Le Castellet for the next round. I'm very happy to have clinched our first victory of the season with Arctic Energy. I‘ve been with them for four years now. It is a new car for us as a team and as a driver. The JS2 R is quite a special car. It's rather light but at the same time it has quite thin tyres so you get a lot of fun driving it.”

“It was a great battle with Sacha Lehmann all throughout the first stint. We were separated by just one second. I struggled a lot behind him because oil was coming from the back of his car and it was landing on my windscreen and I began to have a tough time seeing at the end of the stint. But after the pit stop, we managed to come out of the pits with the lead and I increased the gap and then held on until the finish! This is my first win in this competition and in sport-prototype and its fantastic.”

Race 2 set off at 1:15 pm, during the absolute hottest time of the day.

On the opening lap, the Belgian driver Kevin Balthazar snatched first place from Sacha Lehmann in the M Racing #16. On lap two, the French teenager regained the lead, but only briefly. Two laps later, the #81 was back in the lead despite the aggressiveness of his pursuer who continued to pose a threat. The pit stops didn't change the positions. Kevin Balthazar was among the last to come in and he increased his lead to finish with a more than 20-second margin of victory from Sacha Lehmann in the #16, and the fastest lap of the race in 2:30.373s. Andrea Dromedari in the #50 entry finished third. The Belgian Milo Racing team took two victories on home soil!

In JS2 R, the damaged MV2S Racing #45 from race one was a non-starter. Sébastien Baud in the Cool Racing #74 was quick to pass fellow front row starter, Mathieu Martins in the M Racing #86, while Nerses Isakyaan in the Artic Energy #17 occupied third place. The M Racing #69 and CD Sport #30, driven respectively by Laurent Millara and Baptiste Berthelot, battled for fourth place in the category, followed by the HRC #38 with Clément Seyler behind the wheel. The battle for first place was on the boil. Sébastien Baud posted the best time in the race with a lap of 2:36.225s.

When the pit window opened, the M Racing #86 was one of the last to stop. At the exit, it moved into the lead of the category and never looked back, ahead of the Cool Racing #74. The HRC #38, with its new driver Fabien Michal, completed the top three in an order that stood pat just until the chequers were waved.

The father and son Bihel duo in the M Racing #66 won its battle with Laurent Millara in the #69 sister car to finish fourth. Next it was, the MV2S #46 with Antoine Chapus and Laurent Richard and the TM Evolution #11 and driver Alain Grand.

Despite a good show during the race, the Arctic Energy #17, the CD Sport #30 entry and the TM Evolution #25 were not classified.

“It was a terrific race, with some great battles. It was pretty intense early on and we had a nice fight with Sébastien Baud and Nerses Isaakyan behind. The second half was easier, and I needed to control the late stages of the race. I would like to thank Jean-Bernard Bouvet's' Institut de Pilotage and especially the team for giving us a very good car for this weekend. This is a special day with our first victory of the season.”

“It was more or less the same story in race 2, and I said to myself that I need to overtake Sacha as soon as possible because I obviously was faster early in the race. So, I put in an attack at the bottom of the Raidillon, I think it was very tense, but it worked out. I immediately pulled away and that is what built this win as well as the job the team has done since yesterday, which has been just perfect. Winning two races here is great and it's very good for the championship. I would like to do the same in Le Castellet!”

For more information on the series www.ligiereuropeanseries.com